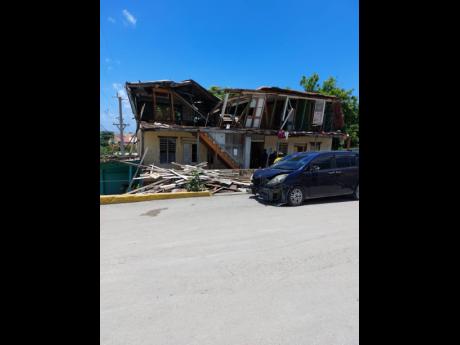 Demolition work on this building in Morant Bay, St Thomas was halted yesterday again following the discovery of a third set of bones.

Demolition work on the Loyal James Lodge premises in Morant Bay, St Thomas, was stopped for a third time yesterday after three skulls and other bones were discovered.

Since Sunday, seven skulls and several other skeletal remains, believed to be of humans, have been found in the old building.

Head of operations at the St Thomas police, Deputy Superintendent O'Neil Thompson, said that the police have taken a vested interest in the matter.

"There are calls for further investigation into the scene. While we don't want to call it a crime scene, it is an area of interest and the site has been cordoned off," he said.

Thompson said the police are yet to identify a person of interest and added that post-mortems have been ordered. The demolition exercise is being carried out by a team from the parish's municipal corporation.

The property's caretaker, a former officer of the St Thomas Fire Brigade for more than 30 years, has said that while he was aware that the building was due for demolition, he was surprised at the grisly discoveries. An elderly resident also said that she recalled three lodges operating from the space, two of which have been defunct since the 1970s. The third, she said, was shut down about seven years ago. Demolition workers have also found documents they say that give a glimpse into the lodge operations at the building in the 1970s.