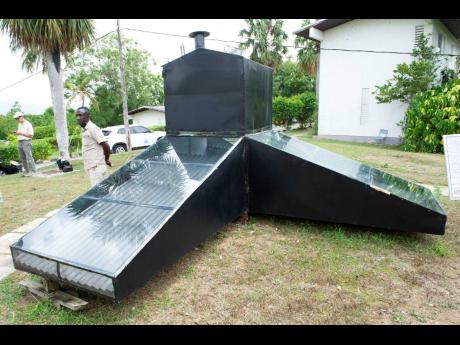 One of the solar dehydrators donated by Trees That Feed Foundation. 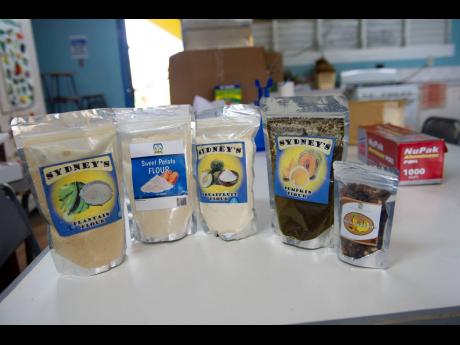 Some of the products made from preserved food being packaged by the school. 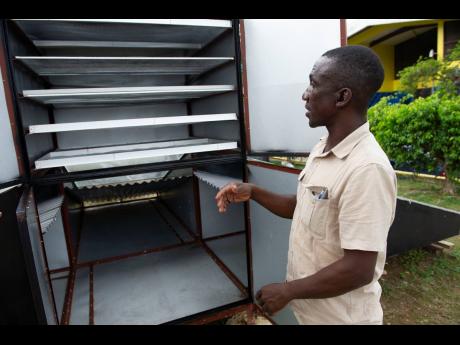 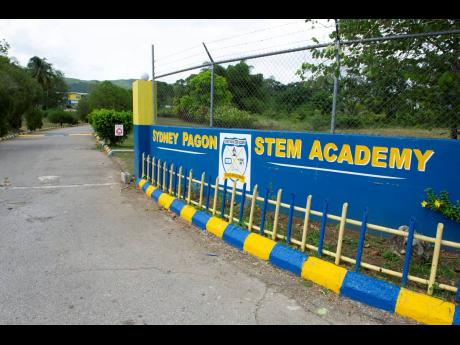 The Sydney Pagon STEM Academy is leading the way to ending food waste through solar dehydration.

This is the process of preserving foods by drying them using the sun. While this process can occur naturally by leaving food like fruits and vegetables to the elements, using a solar dehydrator protects the food from bugs, dust and any debris that could contaminate it. Once the produce is dried, the food's shelf life is extended, allowing it to be further processed into a variety of products including flour. Principal of the St Elizabeth-based secondary institution, Milbert Miller, told THE WEEKEND STAR that the school has been experimenting with the science for several years, even entering its own prototype at the Denbigh Agricultural Show.

"The concept of the solar dehydrator at our school really began with our school entering at Denbigh competition using Red Bull cans. It worked so the concept wasn't new," he said. Though the prototype, which was built by maintenance supervisor Robin Rhoden, served them well, the school received a donation of seven solar dehydrators from philanthropic entity, Trees That Feed Foundation. Rhoden, who has dedicated his entire life to this form of food conservation and preservation, said this is the way Jamaicans ought to be going in terms of food preservation and conservation.

"It doesn't take anything to operate the solar dehydrator, strictly sun, no electricity," he said. "You can dry mangoes, pumpkin, banana, plantain, turmeric, ginger and the shelf life for those could last up to three to four years, properly packed, and store it in a dry place."

Often staying at the school to make adjustments and modifications up to 3 a.m. some days, Rhoden said, "I can tell you this much, I would recommend a solar dehydrator for any home, for any individual who is seeking self employment. It can do just that for you, you wouldn't have to work for anybody."

Currently school administrators are using the food that has been preserved to supply the home economics department, the breakfast programme, as well as other St Elizabeth schools.

"For example, I did some dried pineapple and some mangoes and the home economics department utilises it. Breadfruit, they would use to make some stuff like some cookies. And there are a couple of schools in St Elizabeth that I used to supply with breadfruit flour for their breakfast feeding programme," said Rhoden.