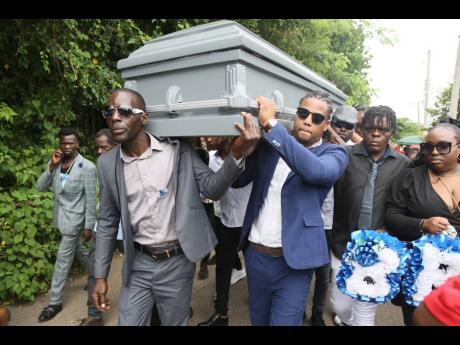 Pall bearers carry the casket holding the body of Scot Bamburry, the Wood Hall, Clarendon man who died while on duty as a stevedore in July. 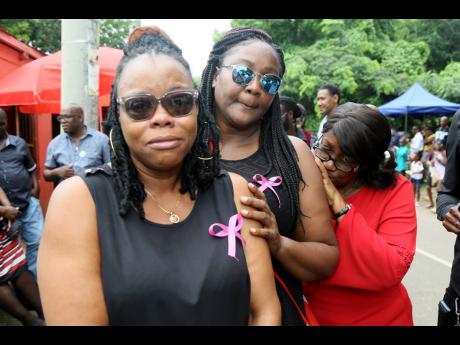 (Left to right) Tamar Grant, Colis Decardova and Sharon Fielding reflect on their relationship with their lifelong friend Scot Bamburry. 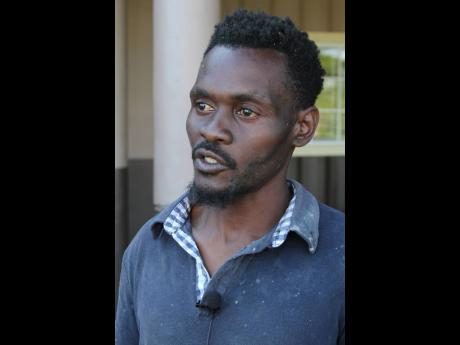 Clarendon stevedore Scot Bamburry had big dreams to develop his rural Wood Hall community in Clarendon, but did not get to do that after dying while working on his dream job.

Last Saturday, scores of mourners gathered at the Shingle Hut New Testament Church of God in Wood Hall to bid farewell to Bamburry, who died in July. He was featured in THE STAR in May 2021, working at a car wash in the community, despite having a diploma in international shipping and logistics from Caribbean Maritime University. He lamented that he spent years sending out several applications to find a job in his area of training with no luck. But after the story was published, he was hired as a stevedore at Newport Stevedoring Services Limited, a subsidiary of Kingston Wharves Limited (KWL).

But in a cruel twist of fate, the company reported that Bamburry fell overboard while performing duties at the Port of Kingston. Two days later, his body was fished from the Kingston Harbour. Bamburry's brother said the autopsy revealed that he drowned. On Saturday, Bamburry, 38, was eulogised as being humble, respectful, and hard-working. He was a member of the Wood Hall community football club, and Peter Reid, a club member, said his death was a setback to youth development.

"He always said he wanted to see Wood Hall football club reach premier-league level. He played a great role in Wood Hall. He inspired di youth dem and let dem know there's hope. He visited us after he started working and said he was gonna take it from there. I'm so sorry we lost him. The village has been set back, but we know his spirit is around to see the best of us," said Reid. Elisa Craig, Bamburry's childhood friend, shared that upliftment of Wood Hall youth was atop Bamburry's agenda.

"He said, 'I'm gonna pull out some of the young people in this area the same way I was pulled out.' He has given a lot of these young men in Wood Hall hope," said Craig.

Tamara Grant, another of Bamburry's friends told THE STAR that she still harbours guilt over his tragic and untimely death, having chauffeured him to Portmore, St Catherine where he would stay and travel to work in Kingston.

"Maybe if mi never carry him ... maybe if him did still up here, he would be okay," said a tearful Grant. "When I heard about the interview he did [with THE STAR] I was so happy for him, because that is something we talked about. He wanted to get the job, and he was like, 'Tamara, mi nah worry, mi just a wait mi time and mi know it a go come'."

Bamburry's girlfriend, Carmelita Shields, said he was the best partner.

"The night when I got the call that he fell off the ship I couldn't believe it. I was saying, 'Please Father, don't let anything happen to him' and I was just hoping for the best," Shields shared.

Denise Samuels, group human resource manager at KWL told THE STAR that despite Bamburry's short tenure, he was awarded as an outstanding performer in April.

"We had seen the article in the newspaper and invited him to come in for an interview. He was so excited. In fact, when he showed up for the interview, he advised us that he was pretty much ready to begin working the very same day," Samuels said.