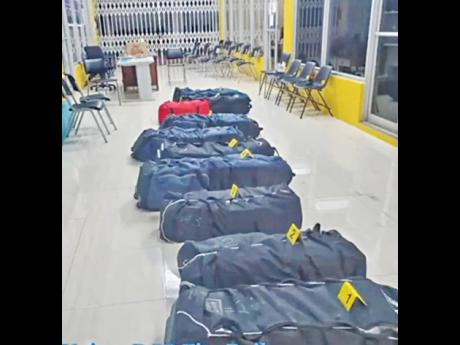 Cocaine with an estimated street value of US$25 million (approximately $3.7 billion, which was found in bags at the Ian Fleming International Airport in St Mary last month.

Head of the police's Narcotics Division, Senior Superintendent Jervis Moore, yesterday said that there has been a recent spike in the trafficking of drugs through the Jamaican ports.

In recent weeks, the police have seized billions of dollars worth of cocaine in shipments, with the most noticeable occurring at the Ian Fleming International Airport in St Mary in September.

"Based on intelligence gathered, there had been a significant increase of production in Colombia and if there is a ramping up of production there, it will be a spill over," Moore said. "This is so because Jamaica, as you know it, is a hub towards getting the drug into the United States and into Europe, hence the level of cocaine activities that we are seeing recently." According to a report on BBC, Colombia has increased its production of coca plants, the main ingredient in cocaine, by 43 per cent, according to a new United Nations report.

Moore said that cocaine is generally transshipped through Jamaica to North America, Europe or other parts of the Caribbean because of the island's positioning, which is between South and Central America, which are the sources of cocaine production. Moore also expressed concern as persons have attempted to traffic drugs through post offices or established courier service companies.

"This usage has increased particularly over the last five years and more recently since the advent of COVID-19 pandemic. Last year we were able to arrest in excess of a 100 persons for using the post offices and courier services for the trafficking of drugs. This year we are seeing a lull since that impact of last year, but we are somewhere in the region of 70 arrests," he said.

Moore was speaking at an event in Port Royal, Kingston, to mark the handing over of a Buster density meter and contraband detector donated by the UK Government to Jamaica Customs Agency. The device is designed to scan and detect illicit drug items in vehicles, which allows an inspector to determine whether a suspect's vehicle tests positive for contraband in less than five minutes. Four meters will be handed over at a cost of PS5,000 each. Moore told THE STAR that the donation will serve as a major boost to his unit's fight against the trafficking of drugs.