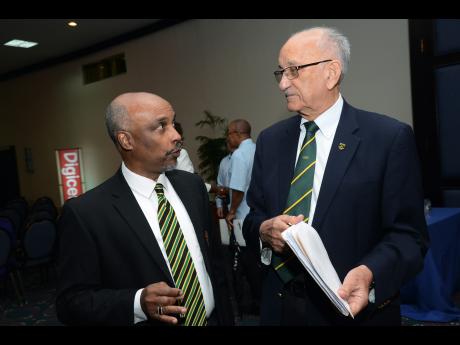 Ricardo Makyn/Staff Photographer Christopher Samuda (left), secretary general of the Jamaica Olympic Association with President Mike Fennell during yesterday's announcement of the make-up of the Olympic Team to Rio. 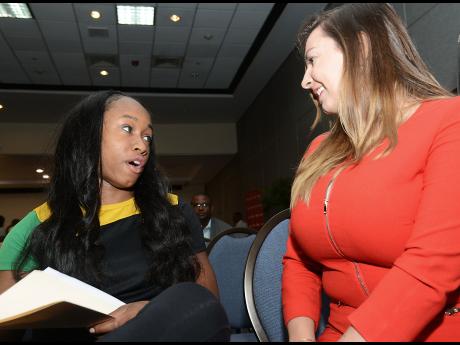 Ricardo Makyn/Staff Photographer Gymnast Toni-Ann Williams (left), a member of the Jamaican Olympic team to Rio de Janeiro, Brazil, speaks with Diana Jorge Valle, deputy head of mission at the Brazillian Embassy in Jamaica, during yesterday's announcement of the team at The Jamaica Pegasus hotel in New Kingston.
1
2

Forty-four first time Olympians were named in Jamaica?s 63-member contingent, which was yesterday announced for the 2016 Olympic Games in Rio de Janeiro, as the Jamaica Olympic Association (JOA) outlined the country?s largest ever delegation to an Olympics.

This eclipses the 50 athletes that represented the island at both the 2008 and 2012 instalments.

It was a point of great pride for JOA President Mike Fennell, who also used the occasion of a press conference at the Jamaica Pegasus yesterday to underline the wide range of representation on the team.

Track and field will as usual account for the largest number of athletes on the squad with 59 entries ? 41 of which will be travelling to their first Olympic Games.

Jamaica will also be represented in gymnastics following the historic qualification of Toni-Ann Williams, who will become the country?s first Olympic gymnast with Yona Knight-Wisdom set to compete in the 3m springboard diving event and the experienced Alia Atkinson, who is travelling to her fourth Olympic Games and Timothy Wynter carrying the Jamaican effort in swimming.

?We do have good breadth and the young people coming on shows that there is a fantastic succession in place,? said Fennell.

?If you look at the track and field group, one of the interesting features also is the breadth of events we have qualifiers for. We are not just a sprint factory, we are represented in other things - field events, jumps and hurdles and I think this auger well that we are broadening the base and not just focusing on the sprints,? Fennell added.

As expected, sprint king Usain Bolt ? listed for the 100m and 200m, is among the 27 males track and field athletes despite being forced to withdraw from the Olympic trials a couple weeks ago due to injury.

London 2012 sprint hurdles bronze medal winner Hansle Parchment, who also missed the trials and like Bolt had received a medical exemption, is among four 110m hurdles representatives on the team.

Only a maximum of three athletes can compete in an event with that determination expected to be made on August 10 during the Olympic Games technical meeting in Rio.

Thirty-two women including medical exemption recipients Janieve Russell (400m hurdles) and Elaine Thompson, who won the national 100m title but missed the 200m final due to injury, are also listed in their respective events.