Mixed fortunes for Ja at IAAF World U-20 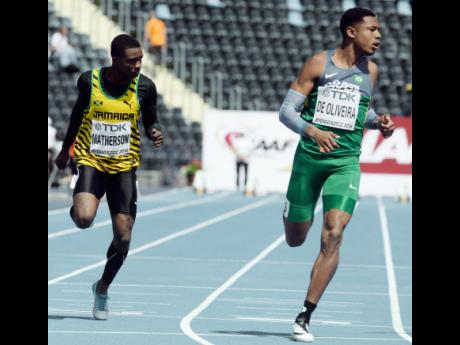 Collin Reid photo courtesy of Supreme Ventures Limited and Courts Jamaica Limited Jhevaughn Matterson (left) of Jamaica getting third in his 100m heat at the IAAF World Under-20 Championships, at the Zawisza Stadium, Bydgoszcz, Poland yesterday to qualify for the semi-finals. Paulo de Oliveira (right) of Brazil won in 10.31. 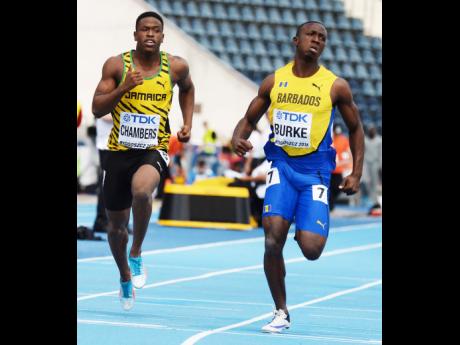 Collin Reid photo courtesy of Supreme Ventures Limited and Courts Jamaica Limited. Raheem Chambers (left) of Jamaica placing third in his 100m heat in 10.45 seconds at the Zawisza Stadium in Bydgoszcz, Poland to quailfy for the semi-finals. Mari Burke (right) of Barbados won in 10.33.
1
2

Yesterday's opening day of the IAAF World Under-20 Championships at the Zawisza Stadium in Bydgoszcz, Poland is one the coaching staff here would like to quickly forget.

Five of six athletes in the field events failed to advance in their events. The biggest shock came in the women's discus where Shanice Love, the National Junior record holder, failed to advance from the qualification round.

Love who has been dominating the throwing event all season failed to register a mark.

Jamaica's other entrant in the event, Devia Brown, had a good day. She advanced to the next round with personal best throw of 49.65 metres to finish ninth overall. She was the only field athlete to advance from the qualifying round.

In the morning session, male discus throwers Sanjae Lawrence and Kevin Nedrick failed to advance. The unlucky Lawrence finished sixth in Group A of the qualifying round with 18.26m. He was 13th overall missing by one spot to advance. Nedrick was 16th in Group B with 16.63m.

In the final event in the morning session long jumpers Obrien Wasome also failed to advance.

Wasome had three foul attempts while Shawn D Thompson's best of 7.33 metres for tenth in his group was not good enough to move forward.

Sprinters Jhevaughn Matherson and Raheem Chambers both finished third in their heats of the the 100m to book spots in today's semi-finals. Matherson clocked 10.46 in heat 2 while Chambers stopped the clock at 10.45 in heat 6. Both athletes will have to show improvement if they hope to advance to the final later today following semi-finals at 12:20 p.m. Jamaica time.