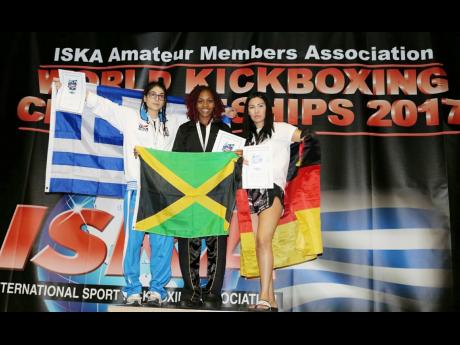 FRESH off a six-medal haul at the International Sport Kickboxing Association (ISKA) Amateur Members Association World Championships in Athens, Greece, Jamaica's martial artists are gearing up for an assault on the United States Open, June 28-July 2 in Orlando, Florida.

Fighters from five organisations, bolstered by members of Jamaica's male and female combined martial arts teams, in addition to participants in the McKay Security Jamaica Taekwon-Do High School League, are aiming at another record-breaking performance after landing 80 medals at the ISKA-sanctioned event last year.

Jamaica won 34 gold at the US Open last year, one more than 2015. Set to host the 2018 ISKA Amateur Members Association World Championships in Montego Bay, organiser Jason McKay said the island is intent on further raising its international profile with another big performance in Orlando.

McKay, head of ISKA Jamaica and organiser of next year's World Championships, said medals won by Jamaica from now will go a far way in promoting not only the tournament but also the island's brand.

"Jamaicans have proven that they can succeed anywhere, anytime and anyhow. Come next year, we're gonna be putting on a show in Montego Bay with three defending champions, one a double gold medallist," he said.

Among the highlights at the US Open will be Jamaica's female combined team taking on their regional rivals in the Caribbean Taekwon-Do Cup to open the tournament.