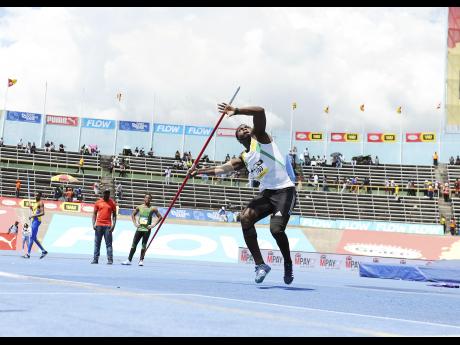 Kevin Nedrick, the exciting throws prospect from Petersfield High School, has left the island to take up a scholarship in the United States. With his high school eligibility complete, Nedrick has journeyed to Kansas and is now a student at Barton County Community College. His transition to life at college overseas could be made easier since a former high school teammate is already there.

Nedrick had a brilliant farewell high school season, setting national junior records in the shot put and the javelin. In the shot put, he extended the record to 20.65 metres to win at Boys and Girls Championships in March. He was already the holder of the national youth record at 20.12 metres.

At Championships, he also placed second in the Class One discus and after setting a national junior record of 63.73 metres in qualifying, finished second in the javelin too.

The broad shouldered champion is following famous Jamaican footsteps to Barton County. Among the accomplished athletes to have studied there are Olympic gold medallists Veronica Campbell-Brown and Aleen Bailey. He is also following a trend of Petersfield throwers enrolling at the Kansas institution. Already there is his former high school colleague Sanjae Lawrence, the reigning US Junior College national champion.