Western Grandstand : Of disrespect and the need to show respect 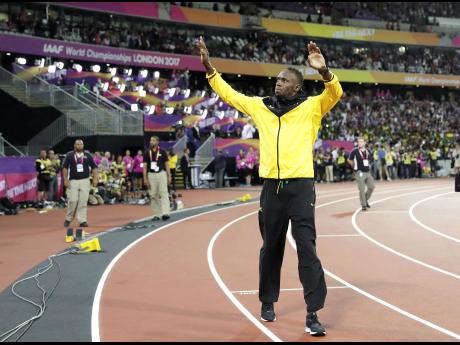 Jamaica's Usain Bolt does a lap of honour at the end of the World Athletics Championships in London in August.

The 2017 IAAF World Championships in London is now history, but I am not one of those Jamaicans who want to declare it a bad experience and move on. I believe it has taught us so many important lessons about ourselves as a people.

While it is true that the championship was a major disappointment in the way of medals garnered, I cannot understand the cruel backlash against the athletes.

After more than a decade of being spoiled by our overachieving athletes, I can understand being stunned by winning just one gold medal when we had so many class athletes on show. However, I don't believe that gave anyone a licence to bad-mouth athletes or say that they "embarrassed".

It is not only ungrateful, but disrespectful to accuse the athletes of not giving their best. As for the dissing of the legendary Usain Bolt, whom I heard being described as a "sell-out," it must be a sign of lunacy for anyone to conjure up such nonsense and have the gall to say it publicly.

Although I can excuse some of the loose remarks from disgruntled fans, I am extremely saddened by the fact that this time around we did not have the customary welcome-home ceremony for the athletes. Surely, it can't be that we only appreciate the athletes when they do well.

I was overcome with pride when I saw how the fans in England treated Bolt after his third-place finish in the 100m. It was as if he had won the race. I was hoping that we would have taken a page out of those spectators' books and given him a 'royal' reception.

Having had the opportunity to travel outside of Jamaica and experience the global impact that Bolt has made, I have no doubt that he is our most revered son internationally, eclipsing even the iconic Bob Marley.

While the Government plans to unveil a statue in his honour in Kingston on National Heroes Day, I am still waiting to hear what will be done to immortalise him in his home parish, Trelawny. I believe the Trelawny Municipal Corporation and the Trelawny Chamber of Commerce need to come together and start the process.

I believe a tourism package should be created around Bolt so that in addition to honouring him and having him serve as an inspirational figure and role model, we could also benefit from his global appeal in terms of marketing and merchandising.

I believe a Usain Bolt tour, encompassing all recommendations I have made, would be a suitable attraction for visitors to the island. Can you imagine the economic benefit that could be generated from visits to the various sites and novel items, such as Usain Bolt Roast Yam and Usain Bolt Jelly Water. I believe the stakeholders in Trelawny are sitting on a gold mine.