My time to shine - Blake 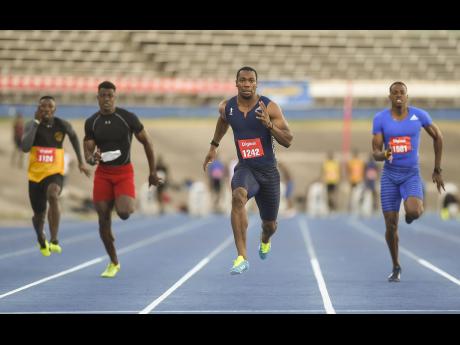 Yohan Blake (centre) wins his 100m open heat in 10.32 seconds, which was the fastest time in the event at the Camperdown Classic at the National Stadium on Saturday.

Despite a modest start to his season, former World 100m champion Yohan Blake reiterated his determination to take up the reigns and fill the void left by the retirement of his former training partner Usain Bolt.

Blake's comment came after he ran 10.32 seconds to win his heat in the 100m at the Camperdown Classics on Saturday.

"I want to take over this 100m. I should have taken over this 100m a long time ago, but circumstances caused me not to," Blake said after the race.

Blake said his running the 100m this early is part of his plans to compete at the Commonwealth Games in April.

"It's my first outing in the 100m and I am looking forward to Commonwealth (Games), so that is why I start the season early. It was a good execution even though I got left at the start," Blake said. "Health and fitness - wise, I am really good. I have been working assiduously with coach [Glen] Mills and everything has been coming together."

He continued: "Coach Mills made some wise decisions to push me into the Commonwealth Games and to let me start early, and I am really happy with that."

After winning two individual medals in 2012 at the London Olympic Games, Blake was expected to challenge Bolt as one of the leading sprinters in the 100m having beaten him at the JAAA National Senior Championships in both the 100 and 200 metres that year. But a major hamstring injury caused him to sit out the greater parts of the following three seasons.