Thompson calls time on her season 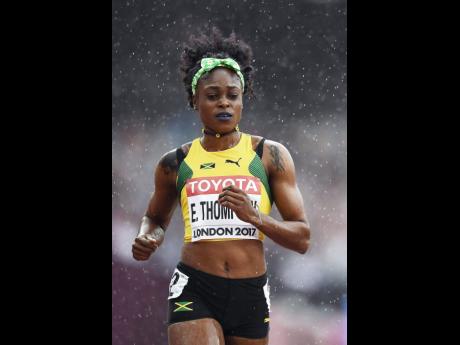 Double Olympic Champion Elaine Thompson has decided to cut short her 2018 season because of injury.

The Stephen Francis-coached athlete's season has been marred by a nagging Achilles tendon injury that has reduced her to placing second and third consistently on the track and field circuit in the 100 and 200 metres.

"Counting the positives, but it has been quite a season where my Achilles continues to affect my results, so it is back to the drawing board," she posted. "Thanks to you all for the support this season, it means a lot to me. See you again on the track in 2019."

Unlike her superb 2017 season, where she registered victories in all but two of her 15 races, Thompson could only manage to win three out of the 10 100 metres races she participated in this year.

The 10.70 sprinter has also struggled to run consistently under the 11 seconds barrier, only achieving the feat three times this year.

She attributes her subpar form to her inability to drive out of the starting blocks, leaving her to play catch-up in most of her races.

After running back from a poor start to win the 100m at the Jamaica Invitational Meet in May, Thompson told reporters that the injury was affecting her start.

"I am not able to drive out of the blocks like I am used to," Thompson said at the time.

Since her breakout season in 2015, this is the first year that the former Manchester High School athlete has not recorded one of the top three fastest times in the either the 100 or the 200 metres.