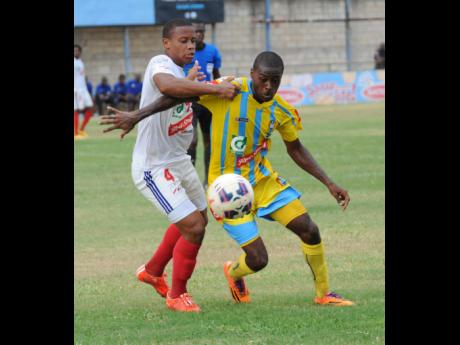 File Waterhouse FC's Kenroy Howell (right) gets the better of Portmore United's Damono Salomon during a Red Stripe National Premier League match at the Drewsland Stadium on Sunday, September 20, 2015. Howell rejoined the club from the Pittsburgh Riverhounds in the United Soccer League in the United States this summer. 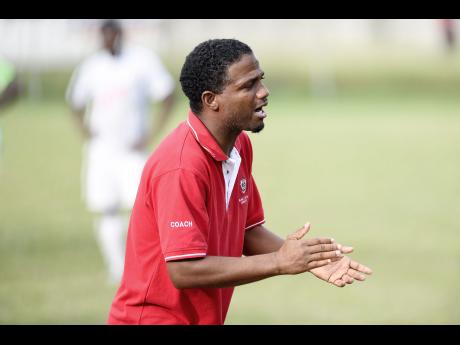 Waterhouse lost two key players in wily midfielder Cardel Benbow and striker Kemar 'Bushy' Beckford to big spending newcomers Mount Pleasant. However, the Drewsland-based club has confirmed that Kenroy Howell, who spent time at CD Dragon in the El Salvadoran Primera Division in 2016, and also played at Pittsburgh Riverhounds in the United Soccer League last year, as well as Rafiek Thomas, who transferred from Harbour View, have joined the club.

They are also working on transfers for at least four other players with the first window set to close on Friday.

"I think the squad is now adapting to my system of play. We have added Kenroy Howell and Rafiek Thomas to the attacking force. I have been there for three weeks and the team is slowly getting there. We will be up and running based on players coming from vacation in the USA. I think by October we should be there," Gayle, who replaced Donovan Duckie late last month, told STAR Sports yesterday.

Gayle, who guided the University of the West Indies to the nation's top- flight league three seasons ago, says he is expecting striker Andre McFarlane, defender Carlos Wright, full back Mark Miller, and rugged defender Shawn Lawes back in training by Monday.

Waterhouse will kick off the 2018-19 season against promoted new boys Dunbeholden, and Gayle says he will approach the game with caution.

"I am fresh back at Waterhouse so we will approach the first game with caution. We won't take them lightly. Pressure will always be there, so I am preparing the team for the test. Of course, our aim is to stay in the league and reach the top six, then take it from there," he concluded.