UEFA Nations League off and running 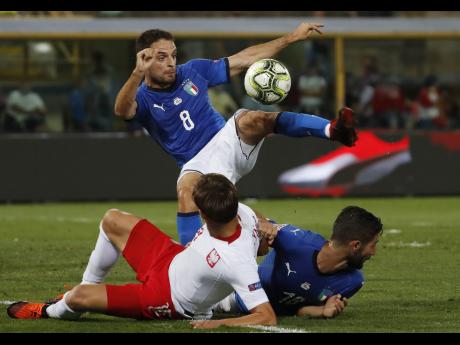 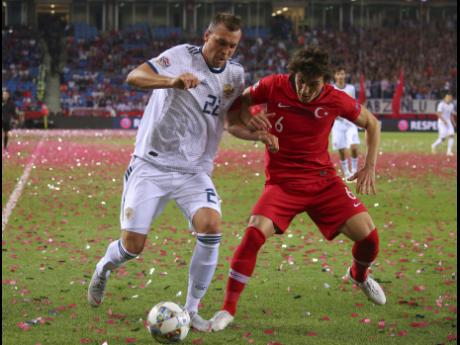 Ten months after failing to qualify for the World Cup, Italy still does not look World Cup worthy.

Playing their first competitive match since last year's play-off loss to Sweden, the Azzurri required a late penalty to draw with Poland 1-1 at home yesterday in the UEFA Nations League.

Poland went ahead late in the first half when Piotr Zielinski volleyed in a cross from Robert Lewandowski following an error from Jorginho.

"We made a few too many mistakes when playing out from the back and that gave Poland the opportunity to counterattack, which was what they wanted to do anyway," Italy coach Roberto Mancini said.

It was Zielinski's third goal this season past goalkeeper Gianluigi Donnarumma, having also scored two in Napoli's 3-2 win over AC Milan in Serie A last month.

Mario Balotelli played for just over an hour without any impact before exiting with a slight limp.

"Mario needs to play. He's an experienced player on the international stage, but his fitness levels are an issue right now," Mancini said.

Italy's only victory in its last eight matches was in May, when it beat Saudi Arabia 2-1 in a friendly.

The Azzurri are ranked 21st by FIFA one spot behind Peru and one spot ahead of the United States for their worst status since FIFA introduced the rankings system 25 years ago.

"Hopefully, we can improve from Monday, but clearly we cannot risk any more setbacks after this draw," defender Leonardo Bonucci said. "Portugal is the reigning champion of Europe and is not to be underestimated."

Russia showed that its World Cup quarter-final appearance was no fluke with a 2-1 win at Turkey in League B.

Artem Dzyuba scored the winner early in the second half after being left unmarked behind Turkey's defence.

Denis Cheryshev opened the scoring for Russia then Serdar Aziz equalised for Turkey.

Serbia have never qualified for the European Championship, but looked solid in beating host Lithuania 1-0 in League C.

The Nations League, which is in its debut edition, provides an additional route to Euro 2020 beyond the usual qualifying, which begins next year. At least one team from each tier is guaranteed a place in the tournament.

In other League C matches, it was: Albania 1, Israel 0 and Romania 0, Montenegro 0.

Substitute Michy Batshuayi scored twice in eight minutes as Belgium eased past Scotland 4-0 in its first game since finishing third at the World Cup.

Seven minutes after coming on at half-time in the friendly, Batshuayi took a pass from Eden Hazard in a swift Belgium break and guided the ball low into the net.

Batshuayi, who is on loan at Spanish club Valencia from English Premier League side Chelsea, struck again from just outside the penalty area on the hour.

The earlier goals in Glasgow came from Romelu Lukaku in the first half and Hazard a minute into the second half.

The Belgian players showed the quality that saw them achieve their team's best World Cup showing by finishing third in Russia in July.

Scotland haven't qualified for a tournament since the 1998 World Cup.