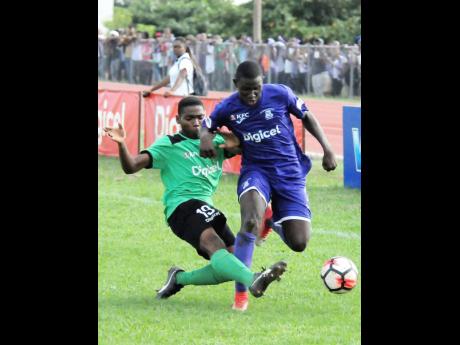 Today, three schools will be gunning for the two available third-place spots to qualify for the second round of the ISSA/ Digicel Manning Cup football Competition and it is positioning to be a photo-finish race.

Calabar, Haile Selassie and Innswood High are locked on 16 points.

Haile Selassie has a big goal difference over the others as they are on 16 goals, whereas Calabar and Innswood are on five and three goals respectively.

But the school from Payne Land is up against its toughest opponent, St Catherine, who is still looking to wrap up the number one spot in the group.

The coach of Haile Selassie, Jermaine Miller, believes his side has what it takes to pull off the win.

"We are confident going into the match," Miller said. "The last time we played St Catherine they were only allowed to take two shots on our goal and those two went in."

He continued: "I think we can prevent them from scoring this time and we know how to break them down."

Calabar should have the easier game of the three schools as they are going up against Ardenne High School, who have failed to record a point in the competition so far and has conceded 34 times.

Innswood will play St Jago, who is also in a race to win top position in their group as they are sitting in second in Group on 22 points, one less than Denham Town High School.