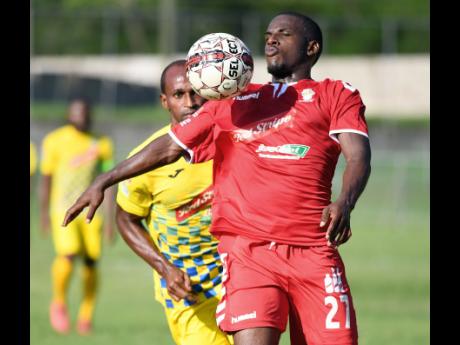 With the departure of Girvon Brown from UWI FC to Waterhouse this season, the responsibility of scoring goals for the university team has now dropped firmly on the shoulders of prolific striker, Anthony Greenland.

The former Rivoli and Harbour View forward believes he has come of age in the nation's top-flight and is ready to spearhead UWI's offence this season. So far, he has had a great start with three goals in six matches already this campaign.

"I've been at UWI from 2016. This is my third season. I have been there since we reached the Premier League and it is the best of me in the Premier League, because with Rivoli I didn't get much goals, and at Harbour View I didn't score any. But at UWI, I scored nine goals the first season, six goal last season, and now I am on three after six matches. So I think it's a good season to look forward to," he said.

"The aim is to pass nine for the season. It will take a game at a time and hard work to pass the nine that I scored before, but with the help of the team it will be possible," he continued.

Usually, Brown would be the player leading the scoring charts or competing with the top strikers for UWI, but Greenland is happy to be among the top scorers in the league and is feeling no pressure from the added responsibility.

"Yes, I expected that (to me among the top scorers) because of the work I put in with the team. We are playing as one, so I expected to be here. There is much more responsibility on me to get the goals but we have Andre Bernal and Davion Garrison as strikers that are always putting in their goals.

"But although there is more pressure is on me as the main striker, it's no pressure. I am used to this pressure, from Rivoli days and high school. It's natural for me to be the main striker," he reasoned.

Greenland has targeted getting at least 15 goals for the season and hopes to help his team mates he can finish higher than last season's seventh place.

"I haven't really set a target for the first round, but I want 15 goals, the least, this season. That is five goals a round. I am one of the persons the team relies on, but anyone that gets the goal, it's still UWI. It's not about me, what I am doing scoring goals for the team as the main striker is just a bonus," he said.