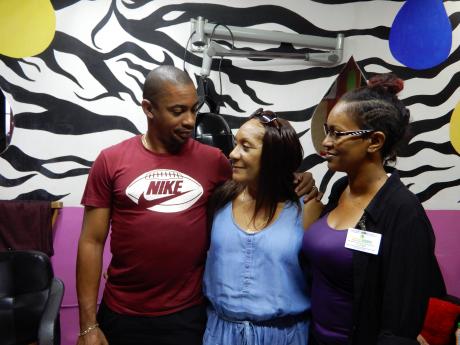 Janet Najair (centre) and children Orville (left) and Natalie reflect on the life of husband and father Vassell Najair. The jockey passed last month because of head injuries received after he was trampled by a runaway horse at Caymanas Park in September. Robert Bailey/Photographer 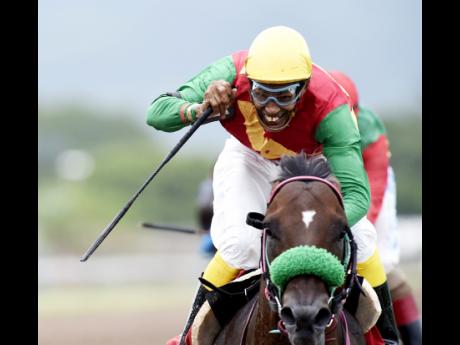 Vassel Najair aboard RAS EMANUEL at Caymanas Park on Monday, August 7, 2017. Najair passed away last month, after head injuries received from being trampled by a getaway horse at Caymanas Park. File
1
2

John Holt's song 'I Want A Love that I Can Feel', will forever be etched in the mind of Janet Najair, the widow of veteran jockey Vassell 'Jollyman' Najair, who died on October 8 from injuries he sustained after he was hit down by a getaway horse on September 26 at Caymanas Park.

Janet, whose 34-year marriage to Najair produced three children: Natalie, Novia and Orville, said she has lost everything since the death of her husband.

"I can't tell you how much it has impacted me," she said. "I have not eaten, I have not slept until just recently. When I saw him lying in that bed at the hospital like that, with these tubes all over him, and knowing that he was a very active person who doesn't like restrictions, it really broke my heart," she said.

"It is like three quarters of my life is gone because we did everything together, we were inseparable. Whenever I am away and he is here, he would call me every morning as soon as his eyes are open and before he goes to bed, he would call me and we would say our prayers together," said Janet.

"He called me about 10:30 in the morning and he said he was cooking callaloo, and when he gets back from the track he was going to cook the food to go with the callaloo," she said. "The other thing he said to me is that he is not riding, but he will be riding on Saturday, but I am going over there to see what I can do and I said to him make sure that you lock up the place (house) properly because you don't know what can happen," Janet said.

"However, I didn't know that was the last conversation we would have," she recalls. The irony of it all, what he was doing that caused him his death, was trying to help a horse that was running loose and his last words that he said to someone before he ran off to help the horse, was that I have to try and help that horse before it hurt himself or hurt somebody else. You see how ironic it is, that is the horse that killed him," she said.

The couple, who has been together for over 40 years, first met when both were living in Central Village in Kingston, while Janet attended the St Catherine High School and Vassell, an apprentice at the late Eileen Cliggott stable.

"The first time we went out, John Holt song was playing, which said I Want A Love I Can Feel and that is our song until this day," she said. "He also said to me from the first time I saw you, I knew that you are going to be my wife."

Janet added that Vassell was a very loving and kind person, who was always willing to help the needy.

"He is the kindnest person ever," she said. He would give you his last and then he would come home and say to me, 'Mommy I don't have any more money left in my pocket, because I gave it away.' I would say to him, 'Why you gave away everything?!' and he would say to me everybody have to eat food, so don't worry about it because tomorrow, we will have more again," said Janet.

Najair was laid to rest yesterday at the Meadowrest Memorial Gardens.