All to play for! - Petersfield, Charlemont square off in Ben Francis Cup final 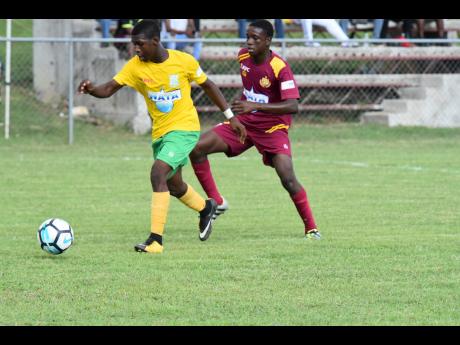 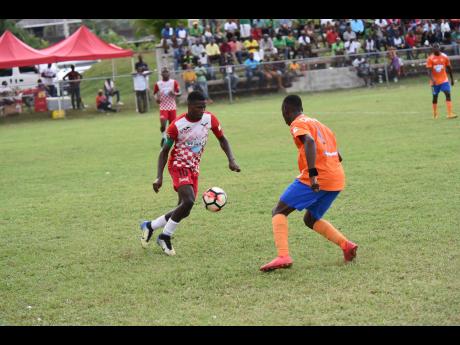 Clive Wedderburn (left) of Charlemont High School controls the ball ahead of Kyle Williams of Lennon High School in their semi-final encounter of the ISSA/WATA Ben Francis Knockout Cup at the Juici Patties Park on Thursday, November 15, 2018. 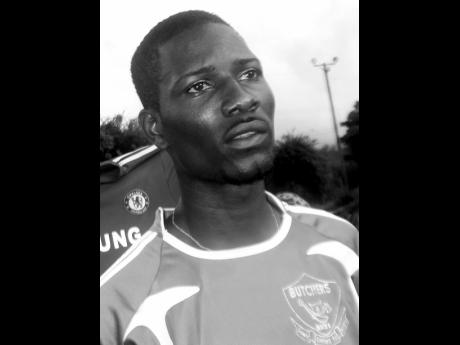 Maurice Duncan, head coach of Petersfield High School is hoping that his different methods of preparing for this season will pay off ahead of their ISSA/WATA Ben Francis Cup final against Charlemont High School at the Juici Patties Park today at 3 p.m. Both teams will be hunting their first ever hold on the title.

"Petersfield is a poor school, so we don't have the luxury that we would want in preparation for the daCosta Cup. Over the years, we usually stay at school, however, when I went there I saw the need to take them to a different environment. We went camping at Holmwood and Charlemont in the preseason, as well as played some of the top daCosta Cup and Manning Cup teams. We did this to get a feel of going out and playing at different places and teams," said Duncan.

"Another thing that I did differently is to introduce the guys to coaching, by running a couple coaching sessions, allowing them to coach. This helped in them developing their knowledge, because I realised that they had the ability to play, but did not understand the game or followed instructions well," he added.

Duncan also believes the new format of the Ben Francis Cup, which saw the eliminated daCosta Cup quarter-finalists put into the competition, gave them a chance at redemption. Petersfield dismissed St James High 4-0, in the first round, then Port Antonio High School 3-0 in the semi-final, after a disappointing run in the daCosta Cup quarter-finals.

But he is still concerned about the lack of goals and is hoping to get that sorted out for today's final.

Meanwhile, Charlemont head coach, Kavi Meeks, is hoping they can repeat their double victory over their counterparts during preseasons as they look to shake off their tame semi-final performance where they edged a lucky 1-0 win over Lennon.

"We are looking forward to the game. We are a bit disappointed we were not able to challenge for the D'Cup. However, we are in a position now where we can win a title and are excited. We know the Petersfield team as we have played them before and got good results (8-1 and 3-1) against them," said Meeks.

"We didn't have a good game in the semi-final but we managed to get the result. Psychologically, I think we didn't master the pressure of playing at this level. However, I think the players are better mentally, and we are just looking forward to a positive result," he said.