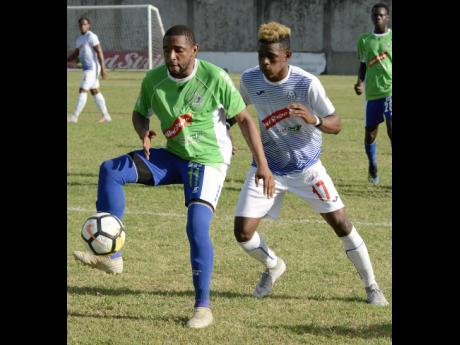 Jermaine Woozencroft (left) of Montego Bay United is being pressured for the ball by Courtney Allen (right) of Portmore United during their Red Stripe Premier League match at the Spanish Town Prison Oval on Sunday, November 11, 2018.

Montego Bay United (MBU) picked up their first Red Stripe Premier League (RSPL) win at home in seven games on Wednesday, after defeating UWI FC 2-0 at WesPow Park in Tucker, Montego Bay. Vassell Reynolds, coach of MBU, is happy to start the first round on a positive note, especially at home.

"We went into the game knowing that only three points could get us into a strong position to start the second round. So yes, it was a welcome victory and big relief in terms of home results," Reynolds said.

MBU, who had only kept three clean sheets before Wednesday, have conceded 18 goals in 13 games and scored only 10. Reynolds highlighted that this is a major concern for the team.

"Both ends of the pitch, we have been having some concerns," he said. "Whether playing home or away, we have been playing well enough in creating a number of opportunities, but just not composed enough in making use of them. Also, we have been conceding a number of goals, but the fact that we would have scored two goals and kept a clean sheet was a big positive for us going forward," said Reynolds.

Reynolds, who was a member of FC Reno's coaching staff for the back end of last season, is looking to use the confidence from Wednesday's win going into Sunday's western clash with Reno at the Frome Sports Complex.

"Before this game, the confidence was kind of low, not just among the players, but the fans as well. I'm hoping that this victory will give us that platform to build on going forward," Reynolds said.

"One is always expecting a close encounter between both teams in what we call a western derby. Those three points will be very crucial. We are going into the match with a positive mindset and, hopefully, we can get a positive result from it," he added.