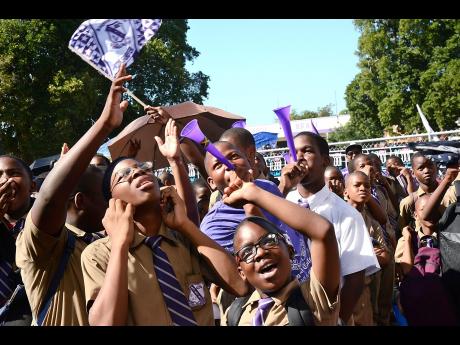 Students of Kingston College in jubilant mood as the school's Manning Cup team returned to the campus with the trophy yesterday, after their 3-2 win over North Street rivals St George's College in the final at the National Stadium on Friday night. 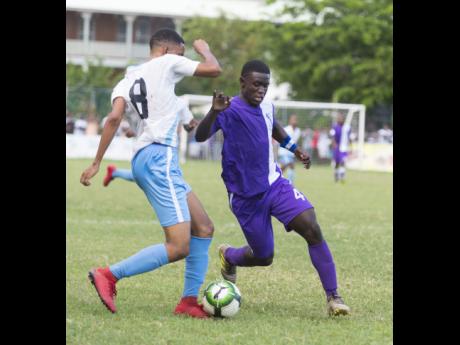 Nathan Thomas (right) of Kingston College gets in a tussle with St George's College player Tyrese Bennett during the Roper Cup at Winchester Park on Saturday, August 25, 2018.
1
2

As was with Balford 'Bally' Reid in the 70's, Neville Oxford in the 60's, and other great Kingston College (KC) athletes who have gone down as KC legends, Nathan 'Kante' Thomas' name will be on the lips of many within the KC fraternity for many years to come.

The stocky midfielder begged coach Ludlow Bernard for more playing time when he was being substituted in the ISSA/Digicel Manning Cup final against St George's College, as he wanted to score the winning goal, which would see to it that KC end their 32 year Manning Cup title drought.

Bernard, who felt his team needed another attacker, was about to substitute Thomas for Renato Campbell before Thomas expressed these now famous words 'Coach, believe in me. Don't take me off'.

"Once Thomas saw Campbell got off the bench, he knew what was going to happen, and he came across and asked me not to take him off," Bernard said. "He said that I should believe in him and he was going to win it (title) for me. I knew I could trust him, based on past experiences, and I gave in to his request."

With the clock ticking down a minute into added time, Thomas received the ball outside of the 18-yard-box and unleashed a shot, which deflected off a St George's College player, and ended up in the back of the net.

The moment sent the thousands of KC supporters at the National Stadium into a frenzy and enabled Thomas to earn the respect of his schoolmates, who shouted 'Kante, Kante, Kante' yesterday morning as they gathered on the tennis court, on the school's North Street campus, to celebrate the win.

"We really wanted to win this for the school," Thomas said when he addressed the school.

Thomas and his schoolmates were given the rest of the day off to celebrate the win, as end of term examinations were suspended for the day by Principal Dave Myrie.