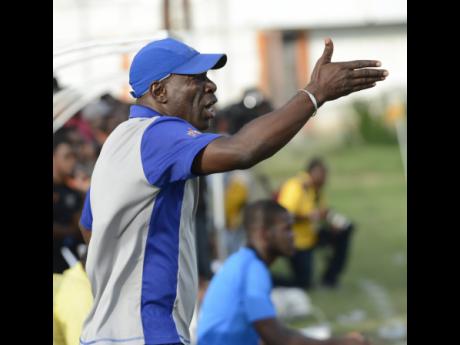 There are mixed feelings from Montego Bay United (MBU) fans over the sacking of head coach Vassell Reynolds after just 12 games in charge of a club in transition.

Reynolds was on Friday relieved of his position after a slow start to the 2018-19 Red Stripe Premier League season.

Team mascot and MBU superfan Everton 'Lunch' McKenzie is disappointed with the decision taken by the club management.

"I wouldn't say Vassell Reynolds was the problem, because you get a good coach and it's a young team. You have to give the youth little time to gel in, and the coach [the] time to get it right," said McKenzie. "They should have given him [up to the] second round and see what happen. Remember him just a come from schoolboy football, so he knows how to deal with the youths and this is a young team."

Errol Moore, who has been a fan of MBU from the days when it was Seba, agreed that he could have been given more time.

"If the team fails, people put it on the management and MBU is used to being in the top six most of the time. With competition almost halfway and we are lagging behind, I don't know ... maybe we want some improvement on the coaching side," said Moore.

"However, I think he should have been given some more time because, no doubt, he is a good coach. I just think he had too much to do this year," he added.

However, another fan, Sandra Thompson, supports the sacking.

"I don't think it's too early. I think it is a good idea, because I don't think he is playing the players in their natural position, so I think he is the problem. You need coaches that can motivate players and I didn't see that in him. We need a coach like Tim (Timothy Hankinson) for the team to play well together," said Thompson, who believes interim coach Dillon Thilwell will do a better job, at least for now.