Vardy opens 2019 with winner for Leicester 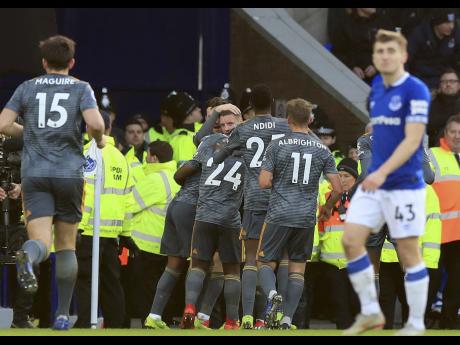 Leicester City's Jamie Vardy looks out as he is mobbed by team-mates after scoring his side's first goal of the game against Everton, during their English Premier League match at Goodison Park in Liverpool, England, yesterday.

Jamie Vardy scored the Premier League's first goal of 2019 to earn Leicester a 1-0 win at Everton in a low-quality match to begin the new year yesterday.

In a goal that summed up the home side's sloppy display, Everton winger Theo Walcott misdirected a header from a clearance and teammate Michael Keane then miscontrolled the ball to allow Ricardo Pereira to play in Vardy.

The former England striker slotted a low finish past goalkeeper Jordan Pickford and celebrated his 58th-minute goal with a somersault.

This was Leicester's third win in four games over the festive period other victories over Chelsea and Manchester City were mixed in with a surprise home loss to Cardiff and the team is now firmly in the top half of the standings.

Before Christmas, there had been much speculation that Leicester manager Claude Puel's job was at risk.

"I will defend my team, my squad and the club and I am just a person who serves the club, that's all, and I would like to continue this way," Puel said. "Speculation, I cannot have an impact about this."

Everton, though, have only one victory in eight games since the start of December and there were constant groans coming from the crowd at Goodison Park throughout a game featuring a slew of basic mistakes from both teams.

"A disappointing result for us and a poor performance also," Everton manager Marco Silva said. "It wasn't a good game to watch."