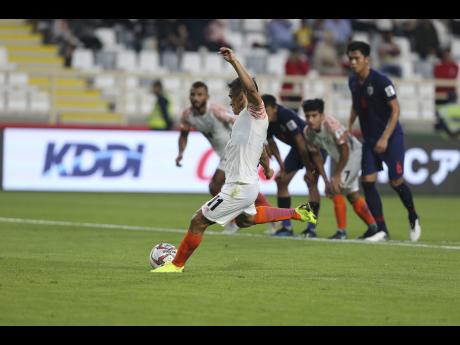 His name is being mentioned in the same breath as Lionel Messi and Cristiano Ronaldo, even though it's a name few football fans are familiar with.

By scoring two goals in his first match at this year's Asian Cup, India striker Sunil Chhetri displaced Messi as the second-most prolific scorer in national team football. He now has scored 67 times for his country, trailing only Ronaldo's 85.

"There is no comparison whatsoever between me and Lionel Messi or Ronaldo, but I am very, very honoured," Chhetri said after India beat Thailand 4-1 in its opening game at the Asian Cup. "I don't take it for granted, the goals I score for my country. Every time I get an opportunity, I do my best to score."

At 34, Chhetri has established himself as the top striker in South Asia since first playing for India in 2005.

"He has worked so hard over the years and has always tried to be as good as he possibly can and inspiring his teammates," India coach Stephen Constantine told The Associated Press. "He deserves to be talked about all over Asia and elsewhere for what he has done for India."

Chhetri is a five-time Indian player of the year, but he was always looking to move abroad to further his career. It just was not easy.

Despite regularly being linked with European clubs, Chhetri was turned down in 2009 by lower-league English club Coventry. The following year, he joined the Kansas City Wizards but was released in 2011 without making it on the field for a Major League Soccer game. Soon after, he failed to earn a move to Glasgow to play for Scottish team Rangers.

When some teams were interested, such as London club Queens Park Rangers, Chhetri did not meet the requirements for a work permit because India was not ranked in the top 70 by FIFA.

The closest Chhetri came to playing in Europe was after a 2012 move to Sporting Lisbon, but after a handful of games for the "B'' team he left Portugal and returned to India.

Now in his mid-30s and playing for Bengaluru in the Indian league, a big international move is unlikely.

But he is still scoring goals for his country.

"The Asian Cup, it could not be bigger for us," Chhetri said. "We need to stay focused and keep working hard."

Next up for the Indians is a game against host United Arab Emirates before the group is completed against Bahrain. Suddenly, a place in the last 16 seems attainable.