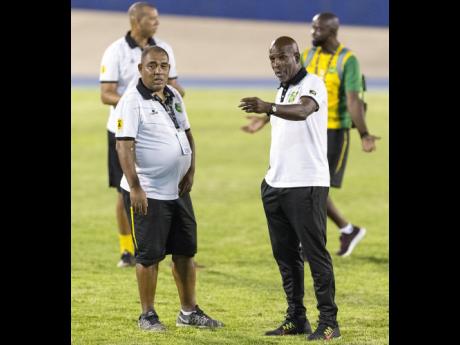 Reggae Girlz head coach Hugh Menzies says the purpose of the 32 player one-week training camp, set to take place in St Ann from January 16-21, is to evaluate the players to ensure the best possible 23 players are taken to the FIFA Women's World Cup in France.

The group features 12 new players, who were not part of the historic qualifying campaign and Menzies noted the importance of the camp, as the technical staff look to put the pieces together ahead of the June 7-July 7 tournament in France.

Menzies noted that they are to submit their list of 23 players for the tournament by March, but that the coaching staff will be using this camp to ensure that the nation's best available players - those who participated in the qualifiers and those who did not - get a good opportunity to showcase their skills.

"We have 32 players coming into the camp and we will be assessing and evaluating the girls that we have. We have to start cutting the squad, so we can have our list of 23 players by March, as the best 23 players is what we are trying to get to and that's our focus," he told STAR Sports yesterday.

"We just want the best 23. It's not a matter of who or what. We are just looking for the best 23 players that can cover all four lines on the field," he added.

The squad has a dozen newcomers, including the impressive Olufolasade Adamolekun, who bagged a hat-trick against the Girlz in their exhibition game against Nottingham Forrest in December. The other newcomers include Chanel Hudson-Marks, Cheyna Lee Matthews, Havana Solaun, Kayla Jay McCoy, Shayla Smart, Siobhan Wilson, Tarania Clarke, Tiffany Cameron, Victoria Huxtable, Vyan Sampson, and Madiya Harriott. However, the squad is missing regulars like, Jody Brown and Trudy Carter. While only three local-based players (Tarania Clarke, Chris-Ann Chambers and Shanise Foster) have been included.

Coach Menzies added that he hopes the Girlz push each other to the maximum and make it a real competitive environment.

"The girls that will come and put out their effort will get to come back. We know they come in with the intention to give of their best and at the same time push each other. So it will be strong competition and that is what we want to promote," he stated.