'My time will come' ... Disappointed Shaw hoping to lift sportswoman of the year crown in the future 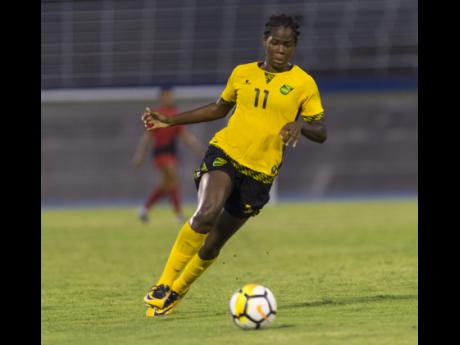 File Jamaican striker Khadija Shaw on the move during Jamaica's 9-0 win over Antigua and Barbuda in the CONCACAF Caribbean Women's Qualifier at the National Stadium last August.

Reggae Girlz striker Khadija 'Bunny' Shaw was hoping to become the first female footballer to win the 2018 RJRGLEANER National Sportswoman of the year award at The Jamaica Pegasus hotel.

Despite watching swimmer Alia Atkinson walk away with the award for the third time, Shaw said she was 'humbled' just to be nominated, but hopes to continue producing her best for the national team with the hope that sometime in the future, she can win the coveted award.

"I was a little disappointed, but it's life, you are not going to win everything. But I will just keep doing what I am doing and don't focus on other people, and, hopefully, it will happen," Shaw told STAR Sports.

Meanwhile, Shaw is confident that with adequate preparation, the team can do themselves and the nation proud at their first FIFA Women's World Cup appearance in France this year.

"First and foremost, we need preparation, we have camps coming up and we play Trini (Trinidad) next month. So as a team, we have to just regroup and remain focussed and know that France is where our heads should be," Shaw said. "We will have Brazil, Italy and Australia (in group) and it's going to be tough, but I believe in my teammates, because they (other teams) are humans just like us. We just got to be ready, prepare ourselves for these few months, and, hopefully, we will just go and do our best."

However, being the talisman of the team and leading scorer in qualifying, Shaw is expected to receive a lot of attention at the FIFA Women's World Cup, but she does not feel pressured.

"My thing is just to go out and do my best, and, hopefully, once I do my best, I hope that it is good enough. I don't focus on the pressure from the media, because sometimes if you focus on that, you go crazy. I just do what I do and what I have always done, as long as I continue to have people who believe in me, have faith in me and keep motivating me, and that's my family, teammates and school friends," she said.

She added that "The World Cup, where everyone will be watching, you will have to come out and show who you really are, so the few months leading up to the tournament, I am just going to try to be ready and prepared as possible."