800m star Taylor vows to keep his feet on the ground 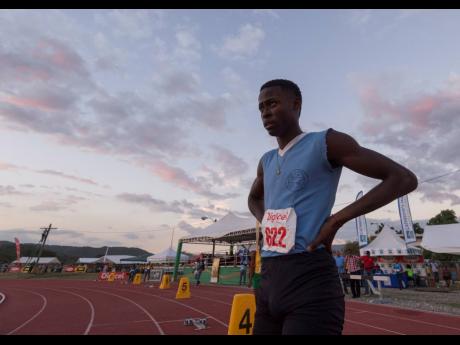 Enid Bennett High's Tyrese Taylor's big win in the 800 metres at last weekend's Digicel Grand Prix finals has ensured that he will be one of the high-profile athletes fans will be turning out to see when the 2019 ISSA/GraceKennedy Boys and Girls' Championships gets under way at the National Stadium next week.

Taylor came close to the 32-year-old Class One 800m record of 1:48.84 set by former Vere Technical athlete Sherwin Burgess after winning the Class One event in 1:48.85, missing the mark by just one hundredth of a second.

According to Taylor, his near Boys Champs' record run on the GC Foster track was not a big surprise.

"I had already run similar times at training so I was not surprised by my fast time," a calm Taylor told STAR Sports at yesterday's Gibson McCook Relays awards presentation inside the National Stadium's Hospitality room.

He has improved immensely in just one year. Last year, he won the Class Two 800m gold in a modest 1:56.36 in Class Two and Taylor pointed to his increased focus in training.

"My coach just ensured that I stayed fit and healthy and remained focused as after running 1:51 at the 2018 National Junior Championships he realised that I had much more in me and as long as I am healthy I could go much faster," he said.

Going up against several Class One heavyweights, including the inform Kimar Farquharson of Calabar High last Saturday, he admitted that he was nervous ahead of the event. "I was a bit nervous before the start of the race but as long as I stayed focused I knew I was going to do something great," he said. Asked if he can go faster his reply was: "We will see at Champs next week." After his victory over the likes of Farquharson and Dugion Blackman of Jamaica College, Taylor is now the man to beat at Champs but he has vowed to keep his focus on the job ahead.

"I do not underestimate any of my rivals as they are all good. I will have to just stay focused. To my fans I say: 'Please come and watch and enjoy me competing as I will always do my best, win or lose' ", a confident Taylor said.

Coach Jodi Pusey, now in his fifth year at Enid Bennett, said most of Taylor's preparation ahead of last Saturday's meet was 'mental' "He had done the majority of the physical work throughout the season already. Honestly, I expected a fast time as I knew that once he gets good competition he was going to do something special and the race was set up for that," said Pusey who revealed that the earlier plan to run his charge in the sprint medley relay at Boys Champs has now been shelved. Taylor ran the anchor leg for his team which broke the sprint medley record at the Gibson McCook Relays last month.