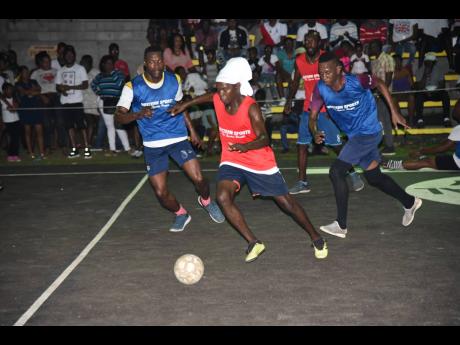 Michael ‘Iron’ Thompson of Team Rasta (centre) dribbles away from Team Police defenders Omali Hope (right) and Channing Bryan in their exhibition match of the MoBay Futsal Championship at the Montego Bay Boys and Girls’ Club court on Sunday.

Richard Vernon, councillor for the Montego Bay South division, is delighted to see the Montego Bay Futsal Championship achieve its objectives and surpass expectations for its inaugural season.

The finals were held at the Montego Bay Boys and Girls’ Club Court on Sunday.

All-Stars defeated Warriors 2-1 to take the title and $80,000 in prize money. Leslie Foster scored both goals for All-Stars, while Davion Dobson answered for Warriors.

The initiative is in partnership with the Social Development Commission and aims to, among other things, facilitate the participation of citizens in a social activity, promote discipline, bolster community engagement, and improve citizens’ health and morale.

“The idea to have the futsal competition came to me, and last year, I decided that I was going to have it. However, it was postponed twice because of unforseen circumstances. February of this year, though, we went ahead with it,” said Vernon. “It is really set out to foster cohesion amongst community members, especially the young men and boys. We have definitely achieved the goal. We have communities that are crossing borders. Oftentimes, people believe that it cannot happen, but this is testimony that it can happen. We have not had even one fight or any confrontation.”

Vernon said that he wants to make the competition an annual event and provide more than just football, with social intervention for a crime-plagued city at the forefront.

“When I spoke to the national coach (Theodore Whitmore) before the competition, he told me, ‘Councillor, if you’re going to do this, do it good and done’. That is what we did, with all the official futsal rules being applied. This also provides an opportunity for persons, if possible, to be recruited for the national team, as they are already learning from now how to play the game in the real sense,” Vernon said.

He also said that the competition would like to partner with Jamaica Moves and other social platforms for training programmes and other initiatives.