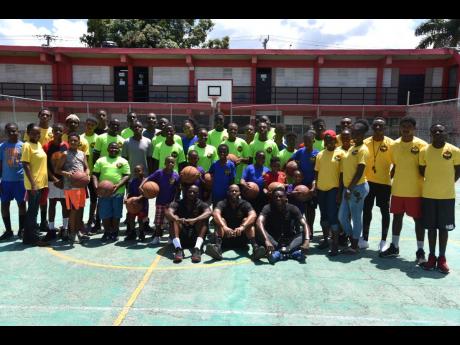 Athletes and coaches pause for a picture at the launch of the King of the Court Basketball Academy’s first training session at the Herbert Morrison Technical High School last Saturday.

Herbert Morrison Technical High School and national under-17 basketball assistant coach Dave Black is optimistic about the talent and opportunities that will come from western Jamaica in the near future with the recent launch of the King of the Court Basketball Academy.

The academy had its first training session at the school on Saturday, which is scheduled for the last three Saturdays of each month.

“The talent that is coming out of western Jamaica is not doing so well, but with stuff like this, we can slowly but surely improve. One of the main things that I want to do is get kids involved from as early as age four, all the way up to 17. Most persons don’t know about basketball until high school. If players start playing the sport from age four, they stand more chance of getting scholarships and become professional basketball players,” Black said.

Black said that to be a professional basketball player takes 11 years of consistent training.

“So if you start from age four, by age 17 or 18, you can be advanced. Most times in western Jamaica, kids start playing at 13 and by that time it is too late. So the objective of the academy is to develop basketball to have a better product coming from western Jamaica. Also because the scholarship opportunity is growing where every year you have more children from Jamaica getting scholarships but nobody knows about it and we are trying to bridge that at King of the Court Academy,” he said.

Black outlined that two of his players, who are overseas at a basketball showcase, are drawing much attention from colleges.

“Right now as we speak, David Gordon and Brendon Dawkins are in New York at a showcase for colleges. We are getting good reviews. David has got about 15 scholarship offers in just two days, so imagine if we had more players going overseas at these showcases. We could have a lot more talent from western Jamaica getting basketball opportunities,” Black said.

Black admitted that like any other sports academy, especially one outside of the Corporate Area, finance is a major challenge, as they only depend on the registration fee of $3,500 per month. Hence, he is calling on corporate Jamaica to lend its support.

“In the future, we want some sponsors to grow to even move outside of St James to other parishes close by,” Black said.