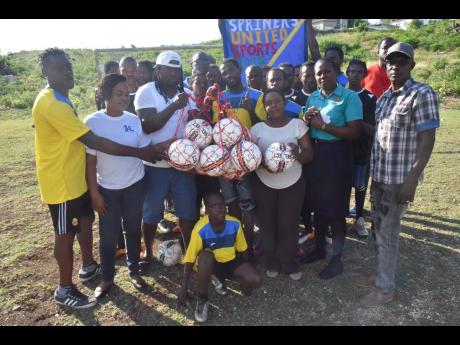 Members of Springers United with some of the footballs they received.

The Peace Management Initiative (PMI) recently contributed 12 footballs to the Springers United Sports Club, based in Salt Spring, one of the volatile communities in Montego Bay, St James.

This came just before a public state of emergency was declared in St James, Hanover and Westmoreland.

Representative of the PMI, Terry-Ann White, said the organisation was happy to be able to play a part through their violence interruption programme and social intervention, as their aim is to use sports as a tool to reach the at-risk youth in these volatile communities.

“Salt Spring is part of the violence interruption programme that PMI has extended within some volatile communities in St James. We work with youths we consider to be at risk,” she said. “As we all know, it has been theorised that sports unifies, especially football. So once we were approached by the club to assist them with some footballs, we gladly took up the opportunity to help. In whatever way the PMI can assist the community, we are most happy to do so”.

“We all know that there have been some issues as it relates to the divide that currently exists (in the community) ... I know that this club currently has members from both sections. We are hoping that our support will also help to eliminate that divide that existed,” she added.

Owen Barrett, founder and president of the recently formed Springers United SC, is grateful for the PMI’s contribution.

“It has a massive impact on the sports club and the community on a whole because the community needed a sports club and football team like this for the youths. With PMI contributing 12 footballs and the peace initiative, it is a massive boost for the youths of this community,” Barrett said. “From what I’ve seen, it is working because right now we have 36 youth with the club, from Melbourne all the way to Flower Hill, so there is no barrier; it has brought unity in Salt Spring. A year or two ago, you could not get all these youth together in one place, like this.”