My chances are as good as anyone – Cunningham 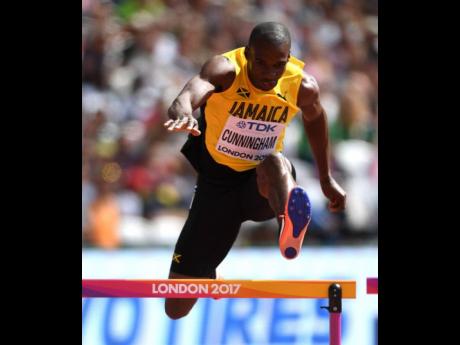 Though he has had to adjust his training programme, 400-metre hurdler Ricardo Cunningham says his chances are as good as anyone else's at the upcoming National Senior Championships. The 37-year-old international learnt a lot at the 2017 World Championships and says he is getting into gear.

A late convert from the 800 metres to the hurdles, Cunningham managed a controlled effort at last Saturday's Jamaica Athletics Administrative Association (JAAA) All Comers meet at the National Stadium. He clocked 50.57 seconds, and then assessed his own performance. "Well, not too pleased but not too displeased at the same time because I had initially started training with the intention of going to the National Trials in July but it was actually shifted down to June and we just have to work with it and get ready when it's time, he said.

Asked how the June 20-23 date of the Trials had affected his training, he explained: "Yes, Somewhat because I had actually when I was writing my programme I had actually planned an extra month of background training and was way into it when the information was relayed back to us."

Regarding his run last Saturday, he said: "I'm working on the technical aspects and it's coming on but it's still not 100 per cent."

His eyes were opened as he raced into the semi-finals at the last World Championships. "I've learnt a lot because it was my first championship and while there, I saw the high level of performances and I just saw that everyone was ready", he cited.

"Once you get there, you just have to be on your A game," he emphasised with a stress on mental and physical preparedness.

The former national 800-metre champion reckons he and his London 2017 teammates, Jaheel Hyde and Kemar Mowatt, have the inside track on team places this time around. "I think there's a good enough chance because when you look at the times that Jamaicans have run so far, the fastest time is like 49.75, so basically we are all between 49 high and 50.5, 50 mid there,"he said.

Leading the Jamaican performance list this year is from Holmwood Technical High School athlete Romel Lewis with US Junior College winner Kenroy Williams also under 50 at 49.96 seconds. 12 other Jamaicans including Hyde, Cunningham and London finalist Mowatt, have run under 51 seconds this season. The London trio has run 50.15, 50.50 and 50.83 seconds in 2019.