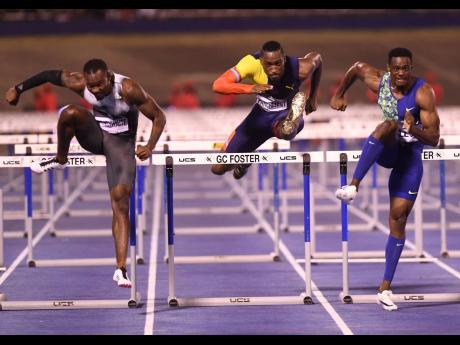 From left: Shane Brathwaite of Barbados finishing second in 13.37 seconds ahead of Hansle Parchment sixth in 13.68 seconds and winner Ronald levy in 13.33 seconds at the Racers Grand Prix, held at the National Stadium on Saturday.

Ronald Levy eked out another victory in the 110m hurdles this season while still nursing his fractured shins.

The former St Elizabeth Technical standout recovered from a poor start to win the event at the Racers Grand Prix last Saturday at the National Stadium and reminded everyone of the promise he showed last season by winning the Commonwealth Games title.

He stopped the clock at 13.33 seconds and though he was disappointed with his race execution, his victory on the night tells him that he can go way faster when he gets it right.

"My shins were fractured and I only started training in January so that explosiveness I had is not there yet so it is causing me to not start as fast as I should," he said.

Levy suffered the injury at the back end of last season and is still learning how to cope with it.

He also promises to make some quick adjustments in practice to be ready for the National Senior Championships in two weeks.

"I think I have to do a lot of things to do to make sure I am a lot smoother at National Championships in two weeks time but I have to go back and listen to what the coach says and take it from there," he said.

Barbadian Shane Brathwaite finished second in the race in 13.37 seconds, while Aleec Harris of the USA was third in 13.42 seconds.

Hansle Parchment could only manage 13.68 for sixth.