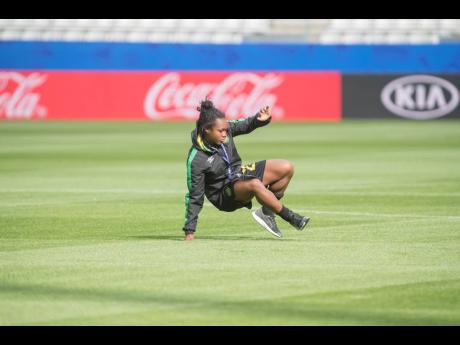 Mireya Grey shows off some dance moves at a training session yesterday. 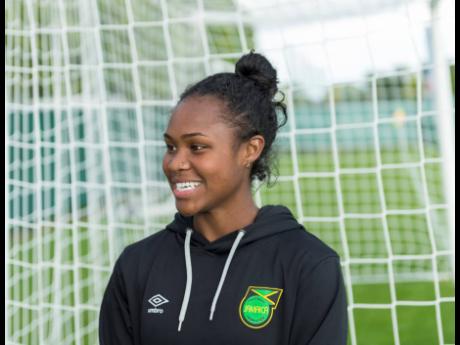 Grey has a lot to smile about these days after being recalled to the Reggae Girlz squad taking part in the FIFA Women’s World Cup to replace the injured Kayla McCoy.
1
2

Jamaican attacker Mireya Grey credits her faith and spirituality for helping her to deal with the disappointment of originally missing out on Jamaica's team to the FIFA Women's World Cup and is now hoping to make the most of the opportunity, even if it came at the expense of an injury to a teammate.

Grey was brought in to fill in for Kayla McCoy, who suffered a knee injury that ruled her out of the tournament.

McCoy, it turns out, is one of Grey's closest friends on the team, leading to a strong feeling of ambivalence. However, the young striker, who said she was extremely hurt over McCoy's injury, believes that the circumstances were engineered by a higher order and is now focussed on helping the team as much as she can in their upcoming assignments at the tournament.

"It was really sad actually. She (McCoy) was one player that I just met before I went back home and wasn't called into the World Cup squad and she stood out to me even when I went home, saying: 'Hey it was great to meet you' and I was like, 'You were one of the sweetest players that I didn't know already', and just to hear of her injury was really heart-breaking," Grey told STAR Sports. "I was praying for her too, but she has been great with it, she has been a great sport and she has really been supporting me. We were texting each other even before I came in the squad."

Grey, 21, who has a year left at the University of Washington, is now eager to play a role in a successful campaign for the Jamaicans, who play Italy in Reims today at 6 p.m. (11 a.m. Jamaica time) before closing out their group commitments against Australia on June 18 in Grenoble at 9:00 p.m. (2 p.m.).

"On a personal level, I am looking to actually make a positive impact on the team, and then I am looking forward to seeing Jamaica in a lot of headlines.

"Now that I am at the World Cup, I am past the wall where I was saying well I would make it to the next one, the next tournament or competition, but now that I am here, I think that I belong here and I can compete with everyone at this tournament. As soon as I got on the field, it's up to me to impact the team and do my best to help the team and do my best," said Grey, who shared her reaction to the news that she did not make the team to the World Cup, when it was first named.

"I wouldn't call it a disappointment not making the team originally. Not that the World Cup wasn't a huge dream, but I am huge on faith and I said that God would make it happen when it's the right time. I was training the whole time, and when I got called back in, that was a whole other thing. I was like God, you really just wanted me to rest a little bit and come back so that was good," Grey added. "I am ready, I had been training, I didn't let my guard down."

With completing her obligations at school a big part of her responsibilities, while here in France, Grey spoke of the challenges in balancing representing Jamaica on the grandest stage, while honouring her academic ambitions and the importance of her faith in all of this.

"Faith and spiritually are very important to me. It helps me whether I'm in training or in the hotel room and when it comes to game time, it makes it easy to deal with, because I have been resting in peace in God the whole time," she shared.

"I always prefer do my homework when I have a lot of downtime. But if I am getting ready for a game or something, I will just save it for later. I rather cram homework into a specific time than try to cram me relaxing and trying to get ready for a game," she smiled.