Chris Gayle says he may continue for five more years 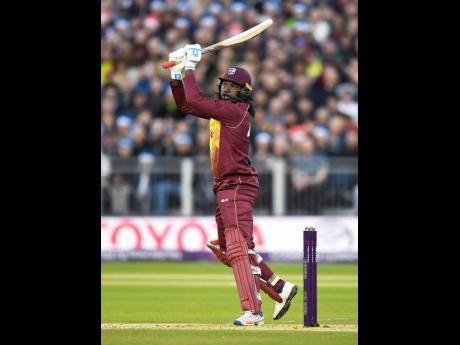 Hard-hitting batsman West Indies opener Chris Gayle says he will not be walking away from international cricket anytime soon.

Gayle, speaking on a Reggae Sumfest-produced programme on Saturday night, said he is not about to put down his bat.

"Because a lot of people talking, I am going to give them five more years of international cricket," Gayle said, when asked what he plans to do after he retires from the sport. The 39-year-old Jamaican was expected to announce his retirement from international cricket following the ICC World Cup in England.  However, he continues to suggest that he is not ready to leave the game.

Fellow legends such as Curtley Ambrose and Andy Roberts said the selectors must now look past the big Jamaican.

“Let me tell you something, one word; nonsense,” Ambrose said of Gayle's pronouncement that he intends to continue his international career.

Roberts said the time has come for Gayle to pull up stumps.

“Chris has been one of our great players and I make no bones in saying that, but the time has come that we have to let the greatness speak for itself instead of trying to go on to achieve what he didn’t do because most West Indians were hoping that he would do,” he said.

However, Gayle said he will be playing on. "Dem a guh tired fi se me face," he insisted.