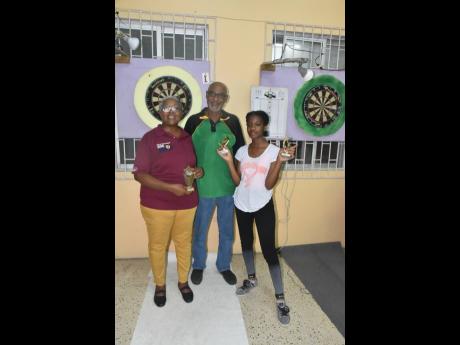 Winner of the ladies’ A Division Mernel Brown (left) and runner-up Kemayia Wills of Mount Alvernia High School with president of the Jamaica Darts Association Winston Ferguson at the Montego Bay Open Darts Championship at the MoBay Cricket Club on Sunday.

President of the Jamaica Darts Association Winston Ferguson is excited to see Montego Bay at the forefront of the resurgence of the sport in Jamaica.

On Sunday, the Montego Bay Cricket Club hosted the Montego Bay Open Darts Championship, which saw just under 100 dart players from across the island, including a number of youngsters, in competition.

“When we started the new movement of the upward mobility of darts in Jamaica, one of the first set of people we called was the Montego Bay dart players. We started with a nucleus of dart players from the west; however, we did not know what would happen. My vision was to have darts in schools. We started with five schools, and it has just blossomed into something wonderful. I was surprised by the enthusiasm that these youngsters brought to the sport. It is natural that the youth resurgence started in Montego Bay, and we want to spread it to having schools in every parish playing darts,” Ferguson said.

He was excited to announce that in October, Montego Bay will host an even bigger darts championship featuring overseas players.

“I am excited as a pig in mud about the championship in October. However, before that, we are going to have an all-schools event here (the MoBay Cricket Club) in September. It should have happened already, but because of the timing of school events, we had to postpone, but it’s going to happen,” he said. “We are gearing for a major upsurge of darts, and that tournament in October will unearth a lot of the youngsters you don’t see here today. It will also gear towards preparation for the Caribbean darts championship next year here in Jamaica. So it’s going to be a full house with players from overseas.”