Shelly determined to get 200 right 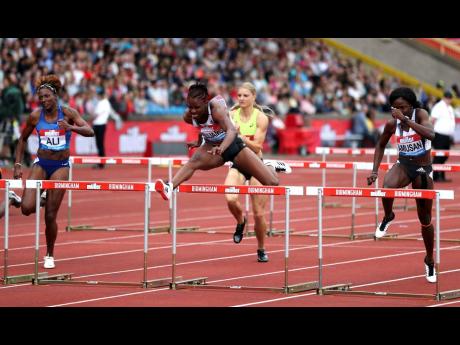 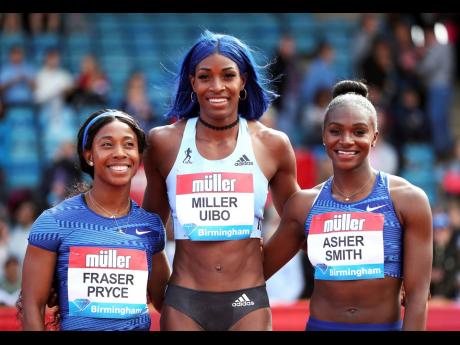 The Bahamas Shaunae Miller-Uibo (centre) poses after winning the women’s 200m final at the Birmingham leg of the Diamond League alongside second-place Dina Asher-Smith of Great Britain (right) and third-place Shelly-Ann Fraser-Pryce of Jamaica.
1
2

Shelly Ann Fraser-Pryce had to settle for a third-place finish in the women's 200m at the Birmingham Diamond League yesterday, but the two-time Olympic champion is determined to get better over the half-lap event before the World Championships next month.

Fraser-Pryce, who finished second at the National Championships in the event, posted 22.50 seconds to finish behind Bahamian Shaunae Miller-Uibo 22.24 and Great Britain's Dina Asher- Smith, who clocked 22.36.

But the 2013 World champion in the event was encouraged by the effort and has vowed to continue taking on the half-lapper.

"The 200m is something I am still trying to master and it's still taking time. I have been doing more 200 metres this year, and I am looking forward to getting in more," Fraser-Pryce said after the race.

Fraser-Pryce won the event last week at the Pan American Games in the meet record time of 22.43 seconds.

"I am not a great 200m runner, and each time I line up, you never know because I am ready to go out and attack," she said.

Four Jamaicans were winners on the day, but it was Danielle Williams who shone the brightest.

Coming off the heels of the JAAA's declaration that she is again eligible to represent Jamaica at the World Championships next month, Williams dismissed a field that included the world record holder, Commonwealth Games champion and Olympic champion by almost a flight of hurdles in the 100m hurdles.

She stopped the clock at 12.47 seconds, while world record holder Kendra Harrison registered 12.66. Tobi Amusan, the Commonwealth Games champion, was third in 12.71 seconds. Janeek Brown, the other Jamaican in the race, finished fifth in 12.79 seconds.