Schools in the west hunting trophies 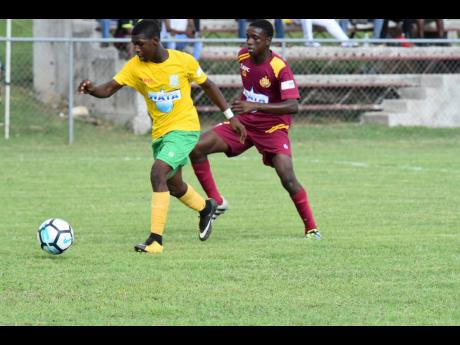 The parish of Westmoreland had a fairly successful season last year despite not winning a silverware. Petersfield High School made it to the Ben Francis Cup final and Frome Technical was a semi-finalist in the DaCosta Cup, and they are prepared to go for a trophy this season.

Renario Downswell, the newly appointed coach of Frome, admitted that it will be challenging to win a trophy, but stated that he is up for the task.

Downswell's appointment came after Aaron Lawrence, who led them to the semi-finals last season, left to take up a job with the Turks and Caicos national team.

"It's going to be a challenge because it's a new environment. One has to get used to the players, know what they are all about and the players that can turn up on match day. Being a head coach for a DaCosta Cup team you're going to have ups and downs, but as a coach, you have to stand up and ensure the guys play well, so I'm up for the challenge," said Downswell, who is the son of technical director for Jamaica's football programme, Wendell Downswell.

"My father played a critical role in helping a lot throughout my career. He taught me a lot of what I know today, so I have to take my hat off to him."

Back in the competition

Godfrey Stewart High School are back for the 2019 edition after their shock absence last season. Principal of the institution, Emily Lawrence Ricketts, is excited to be back in the competition.

"I'm excited because the students are getting an opportunity to play this year. We will just have to wait and see; because they didn't play last year, we have a lot of work doing now to get them ready for the season," he said.

"Last year we didn't have any funds. However, this year, why we are actually playing is because a past student from overseas came and made some donations. We also have different groups of past students working on different aspects of the team to get us ready for the season."

Petersfield want to go one better, having lost to Charlemont High School in the Ben Francis Cup final last year.

"Preparation has been good. We have some that we thought we would have retained, but unfortunately we didn't; however, we have some young under-16 players stepping up. I'm looking forward to this season, we had a few practice games against a few big teams and the results weren't bad," Duncan said.

"I made it to a final last year, so my aim is to win D Cup. If I can't get it, then I'll try for the Super Cup and if not, then the Ben Francis," he added.