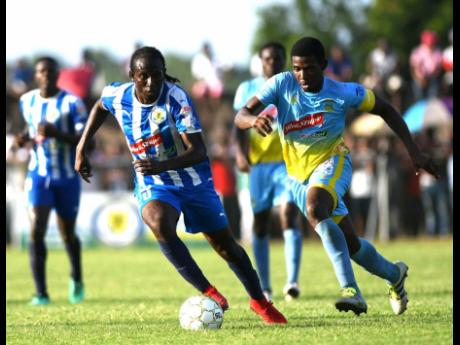 It took him a season longer than he would have liked, but Paul 'Tegat' Davis now has his first win for Mount Pleasant as head coach.

The St Ann -based club got their first win of the 2019 Red Stripe Premier League(RSPL) season on Sunday, defeating Tivoli Gardens 1-0 in front of their roaring fans at Drax Hall.

Davis's second spell at the helm after the firing of Donovan Duckie in early September, started with a 1-1 draw at Humble Lion on September 8. He was delighted at Sunday's result and was happy to reward the fans who turned out in their numbers to support the team.

"To come back home and win your home game in front of your fans, it's a good feeling. That's what we want to keep doing," he said. "We want our fans to be the 12th man for us."

Keslan Hall scored the only goal of the game five minutes from full time in a game littered with chances. Davis credited the Tivoli Gardens goalkeeper Davian Watkins, whose timely saves kept his side at bay for the majority of the game until the 85- minute winner.

"The amount of saves [Watkins] made it was like wow. He kept them in the game right through," he praised.

Davis notes that the team is adjusting well to the style of play that he is employing and with the number of chances they have been creating recently. He hopes that the win will build their confidence going forward as they seek to climb further up the table.

"It's taking time. It's not going to be overnight. The guys are taking time adopting and by winning, it will eventually build their confidence and they will see the bigger picture," he said.

"We are getting eight, nine chances per game. If we can finish the game from the first half it will be good for us."

He is adamant that he is not worried about whether or not he might get the job full time but is solely focused on getting his team ready to play every week.

"I just keep them focus and whatever happens for me will happen. I don't put that big stress or focus on myself. The pressure is putting these guys together to deliver what we want to deliver," he said.

Mount Pleasant is currently sixth in the RSPL standing with four points. They face The University of the West Indies (UWI) FC this Sunday at the UWI Mona Bowl.