Lennon up for B.B. Coke challenge - ... as d’Cup second round begins 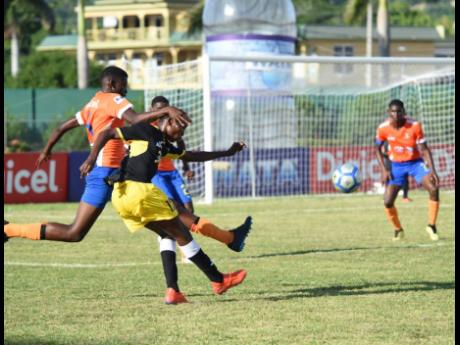 Twenty-one seed Lennon High School are looking for another deep run in this year's ISSA/WATA daCosta Cup but they will have to get past 12th seed B. B. Coke High School in their second-round encounter at the Juici Patties field in Clarendon, this afternoon.

After a sluggish start this season with two drawn results, Lennon got into full gear racking up three wins on the trot but will be coming into the second round of the back of a 1-0 defeat to Clarendon College. The 2016 Ben Francis Cup champions finished second in Group H, with 11 points from six games - three wins, two draws and the one loss.

B.B. Coke, who also had a sluggish start, is coming into today's game in scintillating form with five wins on the bounce.

The coach of the Clarendon-based team, Byjeon Thomas, who is aware of B. B. Coke's rich vein of form, is hoping their knowledge of the playing style of the school from Junction, St Elzabeth would be an asset.

"We know it's going to be a tough game against a team that would have beat one of the daCosta Cup favourites. This means they would have a good team so what are doing is to prepare and know that we have to give of our best. We would have played them in the preseason, so we know the type of football they play and their main players if they don't change much throughout the season," said Thomas, who was a member of the Clarendon College coaching staff that won the Ben Francis title in 2017.

"I don't think there is an advantage for either team because we have to play both home and away.

Right now we are just focusing on tomorrow because without navigating this tie we won't have a chance of playing for any trophies at all," he said.