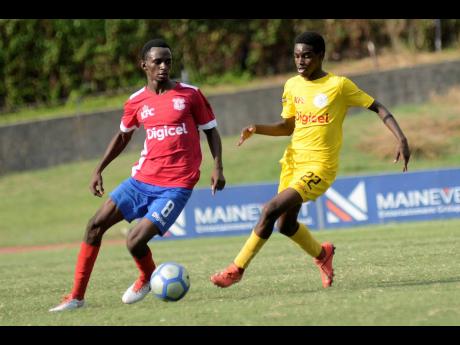 Altiman Gordon (left) of Camperdown High controls the ball while challenged by Rayon Maxwell of Charlie Smith during their ISSA/Digicel Manning Cup encounter on Tuesday, November 5.

Camperdown High School will face their biggest test in their quest to end their 31-year wait to lift a major schoolboy football trophy when they take on defending champions Kingston College (KC) in a must-win game in the ISSA/Digicel Manning Cup quarter-finals this afternoon.

The school from east Kingston are sitting in third place in Group G after losing 3-2 to Wolmer's Boys School and defeating Charlie Smith High School 4-0 in their first two games of the quarter-final round.

Their coach, Christopher Bender, who was part of the Camperdown team that claimed the treble of the Manning Cup, Walker Cup and Olivier Shield in 1982, told STAR Sports that his side is ready to fight for the win, even if it means giving up their smooth passing style of football.

"Tomorrow is not necessarily about quality of play," he said. "Maybe you don't see us playing that free-flowing football where we put the ball on the ground and bounce it around, because the most important thing is to get the win. The team is determined because we are at a stage where this is the most important game of the season for us. We lose this game and we are out."

Camperdown last won a major schoolboy football trophy in 1988 when they lifted the Walker Cup.

Bender's boys will face a KC team that could benefit from squad rotation as the North Street-based school rested several of their top players, including winger Ronaldo Robinson and captain Jahmari Morrison in their ISSA Champions Cup quarter-final victory over Frome Technical High School last Saturday.

"[Rotation of players] is a strategy that had to be employed because of the magnitude of the game that we have tomorrow," KC head coach Ludlow Bernard said. "So we rest some of the key players that we have, to ensure that they are fit enough to give in excess of a hundred per cent.

"We need to ensure that defensively we are very tight and strong, because I believe it is the strongest defence that will prevail. Therefore, we are going to ensure that we don't concede and I believe my attackers will turn up."

The match is set to kick off at 4 p.m. at the Stadium East field, while the group's other encounter between Wolmer's and Charlie Smith will go off at the same time at the Ashenheim Stadium on the compound of Jamaica College.

Avoiding defeat will be good enough for KC to advance, while Camperdown must win to book a place in the final four. Wolmer's, meanwhile, only require a point against Charlie Smith to secure qualification.

ROAD TO THE SEMIS

Wolmer's - Avoid defeat/Hope for a Camperdown loss or draw

Camperdown - Win/Draw and hope for a Wolmer's loss

* If JC lose and there is a draw between STGC and Excelsior, goal difference will be the first tie breaker