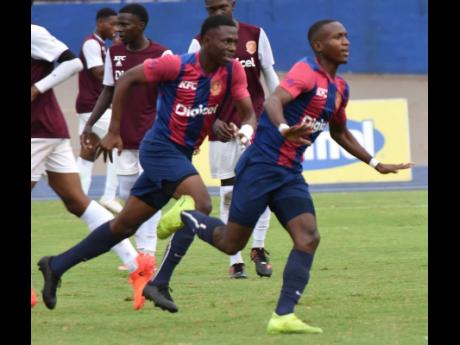 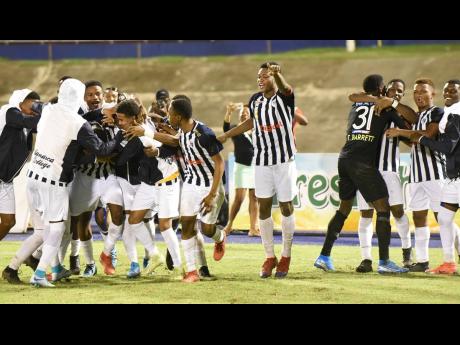 Jamaica College football players celebrate after they beat Kingston College on penalties in the semi-final of the ISSA/Digicel Manning Cup semi-final on November 20, 2019.
1
2

The National Stadium, one of the two iconic sporting venues in Kingston, Jamaica, will play host to the ISSA/Digicel Manning Cup final, as many time champions Jamaica College try to stop perennial contenders St Andrew Technical High School (STATHS) from claiming their second title at the senior schoolboy level.

Today's epic showdown will be a revenge match of sorts for the Dark Blues from Old Hope Road, as they were beaten 2-1 in the quarter-final group of the competition by the team from Bumper Hall.

Luckily for Jamaica College, they did just enough to claim second place in the group behind STATHS to advance to the final four, where they got the better of Kingston College in the semi-final to book there sixth final in seven years.

For STATHS and coach Phillip Williams, they will be playing in their second final in three years, and, for him, the time for silverware is now.

"The mood in the camp is good and the boys are ready. We like these kinds of stage to showcase our young programme, and we are looking to go all the way," said Williams.

After going down to JC in the 2017 final, Williams says his unit will be eliminating the mistakes which cost them the title two years ago.

"We are definitely going to battle JC in every department this time around. We have paid more attention to detail because we know the strength of JC is in their possession play and movement and so we have been working on those areas. However, we want to focus on mainly our game and minimise our limitations and maximise our strength,"added Williams.

Williams' counterpart Davion Ferguson was also oozing with confidence ahead of the big clash. The first-year coach at JC said he is more prepared than ever before and it is for the team to go out and execute on the day.

"The atmosphere in our camp is positive and preparation has been good for the first time throughout the season. We got a full week of training and the boys are ready for Friday,"said Ferguson.

Ferguson made it clear that he has an abundance of respect for his counterpart Phillip Williams, however, it will be a battle royal as his team is ready to fend off whatever STATHS has to offer.

"STATHS is a good team and credit must go out to Phillip (Williams) for the work that he has done with their team. They have weapons to hurt you, however, we have enough big-game players that can create chances and win us the game," added Ferguson.

The Manning Cup final will kick off 5 p.m.