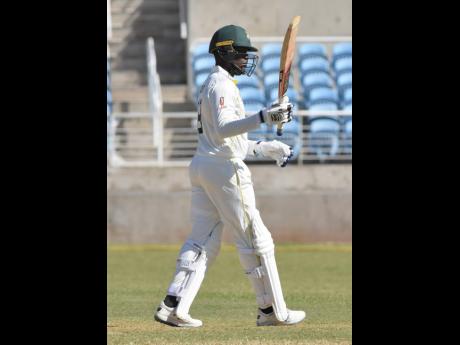 A magnificent innings from Nkrumah Bonner carried the Jamaica Scorpions to an unlikely five-wicket win over the Leeward Islands Hurricanes on a nail-biting final day of their West Indies Championship encounter at the Trelawny Multipurpose Stadium yesterday.

Bonner hit two fours and four sixes in an unbeaten 66 from 48 balls as the Scorpions successfully chased a target of 137 for victory.

The right-hander added 73 runs for the third wicket with Test batsman Jermaine Blackwood, after the hosts lost their openers inside the first three overs in what was effectively a 20-over chase.

The Scorpions still needed 52, when Blackwood and Peat Salmon were both caught behind off successive deliveries in the 13th over, bowled by pacer Nino Henry.

A stand of 26 between Bonner and Denis Smith got the Scorpions past the 100 mark and things were looking back on track in the fading light.

The host needed 26 runs when Smith fell to West Indies off-spinner Rahkeem Cornwall, but Bonner went into a freak mode and hit three sixes and a four off Henry in helping to get them over the finish line with 14 balls remaining.

Earlier, Terance Warde hit the top score of 74 and his captain Jahmar Hamilton supported with 54 in a 110 run fifth-wicket stand as the Hurricanes posted 294 all out after resuming the fourth and final day on 134 for 4.

Pacer Nicholson Gordon was the pick of the Scorpions bowlers with 5-97 from 24 overs and was named Player of the Match.

Winning coach Andre Coley was pleased with the team effort.

"This win is very important for the team as it has given us a lot of confidence especially with the way we had to fight to get the victory, but we are on the right track as the players are starting to play lot straighter and our bowlers continue to show improvements."

"We could have slowed down the game a bit more and kill off the contest but Bonner came up big and so credit must go to the Jamaicans for the way they fought to the end."