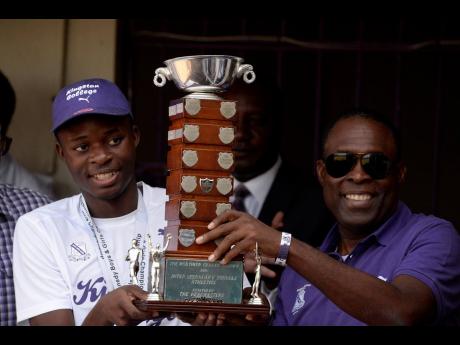 Although pundits have foreshadowed a massive win for his team, Kingston College’s head coach, Leaford Grant is extremely cautious heading into the 2020 ISSA/GraceKennedy Boys and Girls’ Athletics Championships.

It is believed that the defending champions should break their record points tally of 395.5, a feat they achieved last year to claim their 32nd hold on the Mortimer Geddes trophy.

Though Grant is confident that his charges will defend their title, he believes that the championships will be closer than many are predicting.

“We know that the competition out there is aggressive. We believe that Champs , in our minds, will be closer than most people believe, and hence we are staying focused. We are not getting carried away with what people are saying on the road,” Grant explained. “Champs is won on the day, and we have to stay focused and execute well in order to win.”

Grant’s caution may be stemming from 2017 when ‘The Purples’ were predicted to score a massive victory but were beaten by by their old foes, Calabar High School.

“A few years ago, we were expected to win, and it didn’t happen so we are not making the same mistakes,” said Grant, who is in his second season as head coach.

He continued: “The boys are upbeat and looking forward to the championships. They are happy, which is the most important thing. We are controlling the little injuries. If we remain healthy, we believe that we can win this year.”

Like last year, Grant expects the hurdlers to lead the charge as KC won all but one hurdling event at Champs 2019.

“We went back to basics (last year) because we know that the technical events are important in order to win Champs so it is a matter of continuing what we started last year.

If you look at the results at the development meets, you would see that the boys are doing well in the hurdles and the field events,” Grant said.