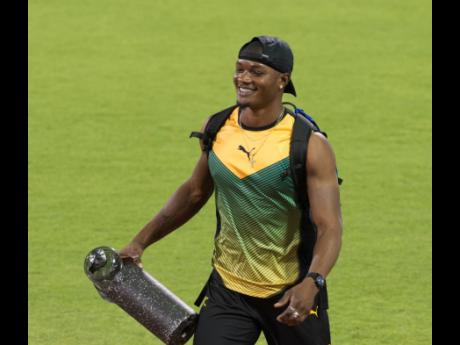 Olympic and World Championships 110 metres hurdles gold medallist Omar McLeod says postponing the Tokyo Olympic Games was the best solution for all athletes at this time.

The Tokyo 2020 Olympic and Paralympic Games have been postponed until next year because of the coronavirus pandemic.

The Olympics have never been delayed in their 124-year modern history, though they were cancelled altogether in 1916, 1940 and 1944 during World War One and World War Two.

McLeod, who currently trains with former United Kingdom athletics coach Rana Reider out of the Tumble Weed track club in Jacksonville, Florida, says it is heart-wrenching that he and other athletes will not get to showcase their skills at this Summer’s showpiece.

“I am devastated and truly feel for all us athletes who have been working tirelessly to accomplish the goals we’ve set for this year. One of those common goals is obviously the Olympic Games,” said McLeod.

With over 460,000 coronavirus cases reported worldwide and more than 21,000 deaths, McLeod noted that it was the best call to make at this time and the most important thing at this juncture is to protect the athlete’s interest first.

“I do understand though that our health comes first and we cannot be naive into thinking that this coronavirus pandemic isn’t something serious. So personally, I do believe that postponing the games to 2021 is the best solution for all athletes.”

The Tokyo 2020 Olympic Games were set to be redemption for the Rio Olympics and London World Champion who was disqualified from the 2019 World Championships final in Doha, Qatar, following a lane violation.

But the 25-year-old Clarendon-born athlete is still being jovial and keeping the spirits up in these trying and testing times.

“We just have to stay motivated and keep aspiring. God bless and wash your hands!”