My First World Cup was my most memorable - Bucknor 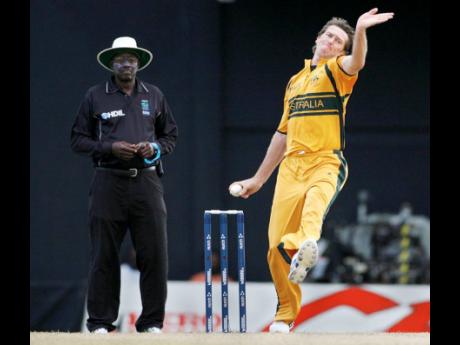 FILE Australia’s McGrath (right), bowls against Scotland as umpire Steve Bucknor of the West Indies watches during their World Cup match in St Kitts in March 2007.

Former international umpire Steve Bucknor has gone down as one of the best officials in the history of the game of cricket.

The legendary Jamaican, now 74, is still honing his craft, albeit on a smaller scale, where he umpires and referee matches in New York at the high-school and recreational levels.

There were many firsts in the illustrious career of the man from Montego Bay, who umpired in 128 Test matches and 181 One Day Internationals between 1989 and 2009.

He was the first to reach the milestone of umpiring in 100 Test matches and held the record for the most Test matches umpired until December 2019, when Aleem Dar of Pakistan stood in his 129th match as an on-field umpire.

But the former FIFA referee who was awarded the Order of Jamaica Commander class in 2007 for his outstanding service in the field of sport, said officiating in his first ICC Cricket World Cup in 1992 in Australia was his most memorable achievement to date.

"I was the least experienced umpire at the World Cup, having done a few ODI games and less than 10 first-class games. I thought I was doing very well, and what made it better was the use of big screens at the grounds to show the decisions.

"I set a target that I wanted to go to the semi-finals. If I reached the semis I would be happy with myself. Once I did that semi-final, where Pakistan beat New Zealand, the same night they said to me, 'Bucknor, you are doing the final, but please don't tell anyone.' It took them three days to find a partner for me and I was happy with my decision- making in that final," said Bucknor.

The 74-year-old described Sir Vivian Richards, Brian Lara and Sachin Tendulkar as the best batsmen he has seen, while he poetically described Australian leg-spinner Shane Warne as the 'Wizard of Oz Magician' when it comes to bowling.

Bucknor said Malcolm Marshall was the best fast bowler he has witnessed in his career; however, he made mention that Curtly Ambrose, Wasim Akram and Glen McGrath were also exceptional.

He added that Pakistan pacer Shoaib Akhtar was the fastest bowler he has ever witnessed.