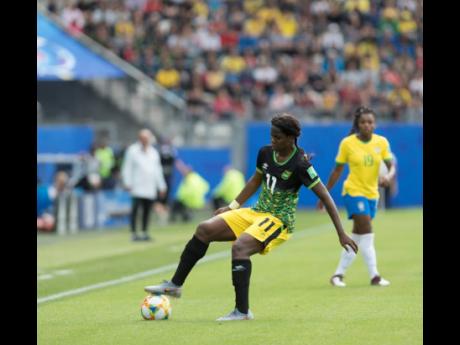 Should national women's striker Khadija Shaw continue to put in strong performances for her French club Bordeaux, French journalist Syanie Dalmat says that a move to one of the biggest clubs in the country could be in her future.

Shaw is in her second season with the club and has already gotten off the mark for the 2020/21 Division One feminine campaign, scoring two goals in their season opening draw against Stade de Reims on September 5.

She is in the final year of her two-year deal with the club which she signed in June 2019 just before competing in Jamaica's debut FIFA Women's World Cup campaign. Dalmat, who writes for noted French sport publication L'Equipe, says that should Shaw decide not to stay with Bordeaux beyond this season, she could be a possible recruit for Paris Saint Germain or defending champions Lyon.

"She could stay in France, maybe [at] PSG or Olympique Lyon," Dalmat said. "England could be great for her [as well]. [But it has to be] a team which plays in the Champions League."

In her debut season last year, Shaw scored 10 goals from 15 appearances, becoming the team's second highest goalscorer behind teammate Viviane Asseyi, who had 12. Dalmat said that she managed to adjust to the demands of the league well, despite a shortened season because of the COVID-19 pandemic.

"She had a good season [last year]. I think she adapted very well at the French league [and] the [partnership] with Asseyi was good," she said.

That partnership was responsible for 22 of the 33 goals the team amassed this season and also saw Shaw finish tied for fourth in the league Golden Boot race.

Bordeaux were in third place with 37 points last season, four points away from a qualifying spot for the UEFA Women's Champions League, before the season was suspended and concluded because of the pandemic. Dalmat says that Bordeaux have a chance of retaining her because of their desire to compete in women's football elite club competition.

Bordeaux are in ninth place in the league with two points after their 0-0 draw with Paris Saint-Germain on Sunday. Still seeking their first win of the season, they travel to defending champions Lyon on September 26.