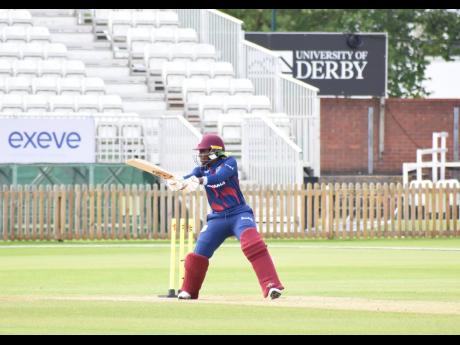 Captain Stafanie Taylor showed little rust after a long layoff from cricket, as the Windies women's team captain hit a half-century in their team's first practice match on English soil.

Taylor was the standout player, as her team posted 131 for six after deciding to take the first strike. Taylor, who batted at number three, came to the crease with her team on 45 for two in the seventh over after Britney Cooper and LeAnn Kirby were dismissed for 24 and two, respectively.

Taylor then showed her true class, hitting nine fours in her 52-ball knock of 71. Taylor almost batted through the innings. However, with two balls to go, she became the third wicket for Aaliyah Alleyne.

Allyne, who picked up the wicket of Cooper and Jamaican Natasha McLean for four, finished with three for 35 from her four overs. She got support from opening seamer Shakera Selman, who bagged two for 15. Another Jamaican, Chinelle Henry, chipped in with 11 from 25 balls.

In their turn at the crease, Dottin's eleven took a swashbuckling approach to the run chase, as the captain who opened the innings slapped a quick-fire 41 from 43 balls to give her team a go at the total.

Wickets at regular intervals would prove to be their undoing, and in the end, they fell eight runs short for the loss of six wickets. Seam bowler Shamilia Connell and Sheneta Grimmond picked up two wickets each. Jamaican middle-order batter Chadean Nation made only six.

Head coach Andre Coley said it was good to see the team in a match-type scenario, as they get ready for the real test against England in a week.

"We've been here for two weeks doing a combination of various skills sessions in the nets, strength and conditioning and game-planning but today was our first time to get as close to a game scenario with this practice match," he said. "We split the teams as evenly as possible and some very promising performances came out of that.

"Both teams were able to bat the full 20-over innings and players spent time at the crease building partnerships. So that was good to see, and we are happy with how things went. Now it's just about fine-tuning and building momentum leading into the series next week."