Windies hope to save face against England in fourth T20 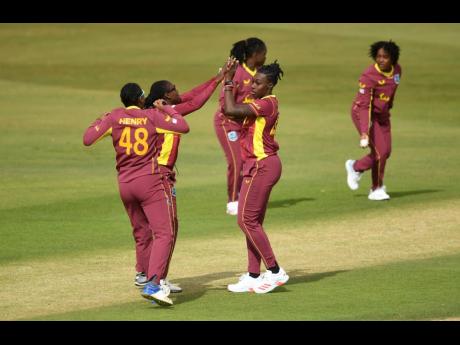 Shamelia Connell celebrates a wicket with teammates against England on Saturday.

With the series already decided, the West Indies will be hoping to pick up a win on their tour of the UK as they face off with England in the fourth T20 International in Derby today at noon, Jamaica time.

The regional girls have not had anything to show thus far in three outings at the county ground, as they suffered two 47-run defeats and lost the third match by 20 runs on Saturday.

The Stafanie Taylor-led team could make a few changes to their line-up, with a couple of players failing to impress thus far against the much more experienced world number two ranked England side.

Trinidadian Lee-Ann Kirby could be one of the players sacrificed for today's encounter, having made just 11 runs in three innings and looked completely out of her depth at this level.

Veteran Grenadian leg-spinner Afy Fletcher has also been disappointing on tour, despite playing her 50th T20 International recently. The stalwart was expected to spearhead the Windies attack with the absence of Anisa Mohammed; however, one wicket in three games may prompt interim coach Andre Coley to allow one of the youngsters on tour to get some international experience, with the series already decided.

One bright spark for the Windies has been the return from injury of Barbadian Deandra Dottin, who has led all batters in the series with 170 runs in three innings at an average of 56.66.

Dottin's effort has caught the attention of captain Taylor, who praised the diminutive right-hander for her resilience after returning from a long lay-off due to injury. She hopes that her good performances with the bat can transfer to other players in the squad.

"Dottin is coming back from injury and she has been brilliant. We have to come out and show the intent as we showed on Saturday," said Taylor.

Fast bowler Shamelia Connell, who put in a good effort with the ball to claim two wickets on Saturday, emphasises that the batting needs to come to the party to support the bowling unit, which has been holding its own in the series thus far.

"Our batting has been failing for a while but it is a work in progress and everybody is getting better day by day. It is not going to happen overnight but I believe we are going to get there," said Connell.