Lawrence looking to make an impact 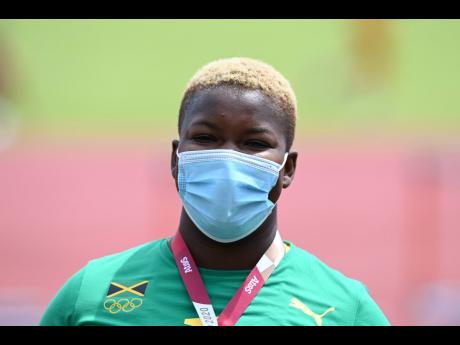 Ever-improving Jamaican thrower Shadae Lawrence has one thing in mind at the Tokyo 2020 Olympic Games - to make a strong impact.

Lawrence, the national record holder in the discus event, arrived in Japan full of confidence in her abilities, having registered a new national record earlier this season, the 25-year-old St Catherine native has lifted her ambitions and hopes to leave her mark on the Games.

"I am excited because it's the first time I am actually training just for the Olympics, so I am excited to see what the possibilities are," said Lawrence, who was still enrolled at Kansas State University when she qualified for the 2016 Olympic Games in Rio de Janeiro.

At those Games, Lawrence, still a bright-eyed youngster eager for experience, was happy to simply get the chance to compete at the Olympics.

This time around, she believes she has the chance to do something special and is targeting a strong performance.

"The ambition has definitely changed. I want to make an impact, I know I can. It's not about experience this time around, I want to do well," Lawrence told STAR Sports.

"I think we are doing really well in the field with Danniel Thomas-Dodd and the jumpers and that is the impact I want to make at this level in my event," added Lawrence.

Competing at the United States of America Track & Field Throws Festival in Arizona on May 22, Lawrence, who was already the owner of the old national record of 65.05m, which she set in 2019, landed the disc 65.47m and followed up that effort with a 67.05m mark to establish a new national record in the event.

The mark makes her the fifth best athlete in the event this season and she believes that her improvements were in some part aided by the extra time she had to work out the kinks in her technique due to the downtime caused by the COVID-19 pandemic.

"I don't think there was a major challenge. I think the break and everything gave me a chance to train and develop my technique," she stated.

Lawrence has so far been keeping to herself inside the Olympic Village, sharing that she was simply happy to be back in training, after the issues relating to the availability of the team's designated training venue.

"I haven't been doing much inside the Village. I try to stay inside and play it safe. We were here two days and we couldn't train but it's good that we were able to come out and start training now. Otherwise, it has been a good experience so far," said Lawrence.

The qualification round of the women's discus event will get under way at 9:30 a.m. on Saturday (7:30 p.m. Friday night Jamaica time) at the Tokyo Olympic Stadium.