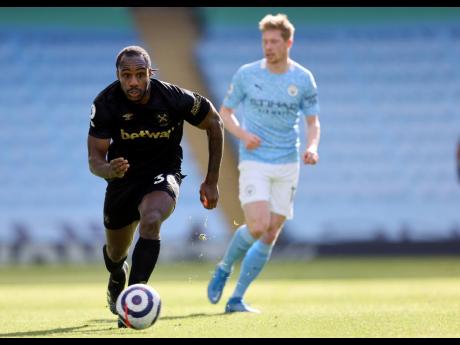 It may not be much longer before West Ham striker Michail Antonio suits up in Jamaican colours.

Jamaica Football Federation Michael Ricketts says that Antonio has received the necessary documents to make his international switch in time for the final round of the World Cup qualifiers, which begin in September. Ricketts also said that passports have also been secured for Rangers striker Kemar Roofe as well as Blackpool defensive midfielder Kevin Stewart.

Antonio had been going through the process of acquiring his passport since announcing his intention to switch international allegiances last March. While he was selected as part of the provisional roster for the 2021 Gold Cup, his documentation was not secured in time for the start of the tournament.

Ricketts said that with those documents now in hand, the last hurdle has been cleared for Antonio to make his Reggae Boyz debut, which could be against Mexico on September 2, adding that the new recruits will bolster the Boyz's chances.

"I think we will be strengthened, to say the least, and we are just hopeful that we will be able to execute and the breaks can go our way," Ricketts told STAR Sports.

Antonio marked in his first game of the new English Premier League season with a goal and an assist as West Ham came back twice to defeat Newcastle 4-2 at St James Park on Sunday. Antonio scored 10 goals and registered five assists last season. Ricketts was impressed with the performance of the 31-year-old to begin the new campaign and said that with his passport now in hand, a call-up could be coming sooner rather than later.

"I think the coaches met on Saturday evening, so we are expecting that there well be an announcement as it pertains to the 23 that will be (selected)," Ricketts said. "[With] his documentation now in place, I have reason to think that he ought to be in the squad going to Mexico."

Jamaica will play five of their first seven games away from home, including their match against Mexico, which will be played with no fans in attendance.