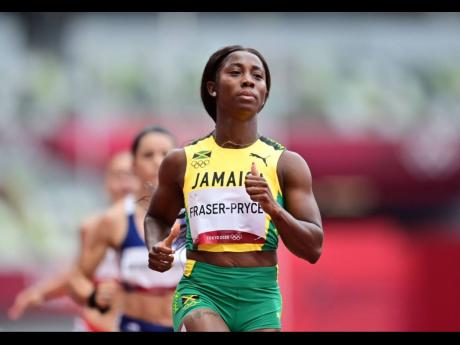 The win was Fraser-Pryce's second meet record time in just over a week. On September 5, in Chorzow, she won the 100m in a Polish all-comers' record of 10.81.

At yesterday's meet Olympic 800m finalist Natoya Goule won the women's two-lap event in 1:58.20 as American Chanelle Pryce was second in 1:59.85. There was also a third-place finish for Olympic 400 metres finalist Christopher Taylor after clocking 45.70 seconds in his pet event.

At another World Continental Tour meet in Zagreb, Croatia, Shanieka Ricketts who missed out on the medals in Tokyo after a fourth-place finish produced a new meet record of 14.77 metres to win the women's triple jump, erasing the previous meet record of 14.58 metres. Neja Filipic of Slovania ended second with 14.37m.

Shericka Jackson again played second fiddle to Olympic 200m silver medallist Christine Mboma of Namibia in the half-lap event. Mboma won in a meet record 22.04 seconds with Jackson second in 22.30. Anthonique Strachan of The Bahamas was third in 23.05, ahead of Sashalee Forbes of Jamaica who took fourth in 23.37.

Jamaica's sprint hurdlers Ronald Levy and Olympic champion Hansle Parchment had to settle for second and third in the 110m hurdles in 13.11 and 13.12 seconds, respectively. American Devon Allen continued his winning run since the Olympics after producing a personal best 12.99 seconds to win the event and became the second man to clock under 13 seconds in the event this season.