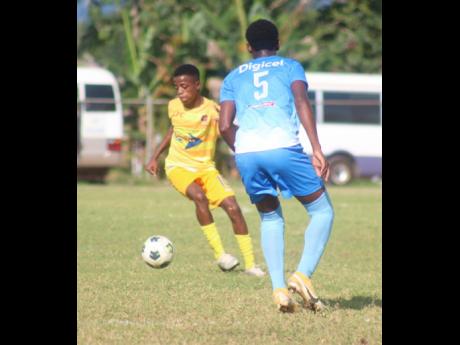 With approximately 400 metres between them, the north Trelawny derby dubbed the battle of Carib Road headlines today's late kick-off in the ISSA daCosta Cup Zone A double-header at the William Knibb High field in Trelawny.

William Knibb who sit atop the table will be looking to extend their perfect run after five games in the competition and secure qualification. Rivals Holland, on the other hand, sit seventh on the eight-team table with just three points.

William Knibb coach Dwight Jeremiah said today's game is their most important to date as a win would see them qualify for the next round and a big one may secure top spot. He is, however, wary of the challenges a derby game may serve up.

"It is an important game because we have not qualified for the quarter-finals yet, a win will ensure that. No matter how one may view the opponents we are expecting a difficult game just the same," Jeremiah said.

"It could be dubbed the 'battle of Carib Road' where both schools are located. It's a derby so as the cliche have it, you throw form out the window it comes down to who wants it more. Due to the proximity of the two schools and the fact that the players know each other well the game could degenerate into subplots because of the players' familiarity. We are trying to avoid that," he added

Coach of Holland, Dane Randall, said they certainly will be playing for pride as getting a win over not just the table-toppers but their local rivals will give them some bragging rights and boost their confidence for next season.

"It's a derby so we have to play up to expectation because there is a rivalry that comes with being so close to each other. I would like us to come away with three points although we know it's going to be difficult. Beating them would give us a boost of confidence for next season," Randall said.

In the early kick-off at 1 p.m. former champions Cornwall College and Herbert Morrison Technical High clash in an all to play for Montego Bay derby. Twelve-time champions Cornwall (10 points) are in danger of not making it past the first round as they sit two points behind today's rival.